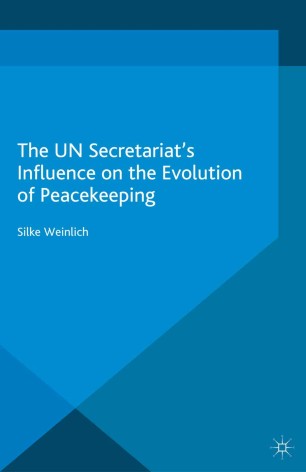 The UN Secretariat’s Influence on the Evolution of Peacekeeping

Using a unique analytical framework, the UN Secretariat's Influence on the Evolution of Peacekeeping reveals deep insights in the UN's peacekeeping decision-making and shows that even international bureaucracies with limited autonomy can shape international politics.

Silke Weinlich is head of the research unit "(Im)possibility of Cooperation" at the Centre for Global Cooperation Research, University of Duisburg-Essen, Germany. Her research interests include the United Nations and its peacekeeping, peacebuilding, and development, as well as UN reform.

“Weinlich describes how the UN Secretariat has systematically accomplished its goals and pursued a new direction without clear mandates from its bosses, namely, the five veto-wielding members of the Security Council, China, Russia, France, the United Kingdom, and the United States. Her book is an excellent examination of bureaucracies and the way lessons and firsthand experience can propel an organization to become more proactive in world affairs.” (John M. Bublic, The European Legacy, Vol. 22 (2), 2017)

“Silke Weinlich’s book focuses on the UN Secretariat’s role in the reforms and innovations in UN peacekeeping during the second half of 1999 and the first decade of the twenty-first century. … the book provides a wealth of interesting material and calls attention to important questions that need further study. I would recommend the book to anyone interested in the evolution and reform of UN peacekeeping.” (Kseniya Oksamytna, acun.org, February, 2016)