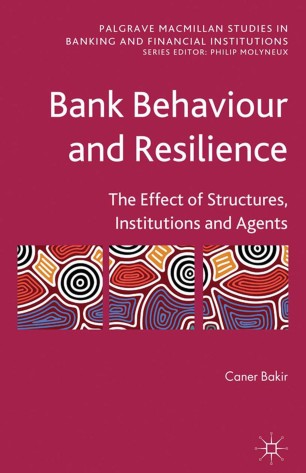 The Effect of Structures, Institutions and Agents

This book provides new interdisciplinary and comparative answers as to why banking sectors in 'liberal' and 'coordinated' market economies operated under a shared set of rules during the Global Financial Crisis. Exploring the role of complex interactions among interdependent structures, institutions and agents defines this banking behaviour.

CANER BAKIR is Associate Professor in the International Relations Department at Koc University, Istanbul, Turkey. He has worked as an Assistant Lecturer in the Accounting and Finance Department at Monash University, Melbourne, Australia. Prior to this, he worked as a banking specialist. His areas of research include institutional analysis, public policy, globalisation and governance. His work has been published in a number of leading journals including Governance and Public Administration and he has published a book with Bilgi University Press. His research has been supported by the Scientific & Technological Research Council of Turkey (TUBITAK) and COST ACTION ISO905 (European Cooperation in Science and Technology). Bakir received the Incentive Award in Political Science awarded by TUBITAK in 2010.

'In Bank Behaviour and Resilience: Effects of Structures, Institutions and Agents, Caner Bakir attempts to explain why some national banking systems have done so much better than others during and after the Great Recession of 2008-2009. He focuses on the generally excellent performance of Australian banks, drawing in comparisons to banking systems in other advanced industrial countries. Bakir emphasizes the interaction of broad economic and political structures with the actions of economic agents themselves, constructing a detailed analysis of the operation of national banking systems. Bank Behaviour and Resilience is an illuminating treatment of one of the more important analytical and policy problems in today's economic environment: how to avoid massive, costly banking crises.' - Professor Jeffry Frieden, Department of Government, Harvard University, USA

'Much is made of Australia's apparent escape from the worst of the global financial crisis, and analysts from different perspectives choose to advance this cause or that as decisive in our experience. This book casts Australian experience against the backdrop of that elsewhere in the world, drawing out cogent similarities and contrasts. Most importantly, the author eschews simplistic mono-causal explanations in search of more complex, interrelated causal nexuses. This must bring us closer to the truth and Dr. Bakir has performed a welcome service for all those interested in a more complete explanation of what went wrong, and why Australia survived the crisis better than most.' - Emeritus Professor Ian Harper, Melbourne Business School, Australia

'In the wake of the 2008 financial crisis scholars rushed to explain what went wrong with national financial systems. But the Australian system performed remarkably well. In explaining what went right in Australia in comparison to five other countries Caner Bakir reveals important differences in financial systems across and especially within liberal and coordinated market economies. His analysis challenges conventional thinking about the varieties of capitalism and sheds light on how to avoid financial crises in the future. Bank Behaviour and Resilience has much to offer scholars and practitioners in the fields of comparative and international political economy, finance and economic sociology. It is well worth reading.' - John L. Campbell, Class of 1925 Professor, Dartmouth College, USA, and Professor of Political Economy, Copenhagen Business School, Denmark.