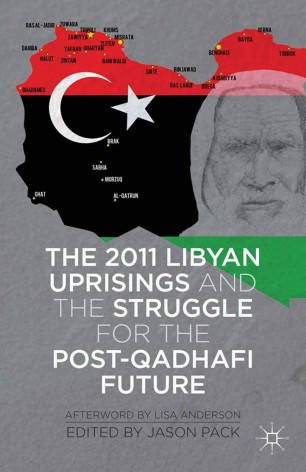 Jason Pack is a researcher of Middle Eastern History at University of Cambridge, UK, with over seven years of experience living, studying, and working in the Middle East. He is President of Libya-Analysis.com and co-author of In War's Wake: The Struggle for Post-Qadhafi Libya (2012). His articles have appeared in The New York Times, The Wall Street Journal, Foreign Policy, and The Guardian.

"Jason Pack has assembled articles by both new and well-known experts on Libya to produce a book of consistently high quality . . . Both timely and excellent, The 2011 Libyan Uprisings and the Struggle for the Post-Qadhafi Future examines the causes and evolution of the Libyan revolution and will help those struggling to understand Libya's difficulties in building stable political structures that might finally allow its people to benefit from its oil and gas resources . . . It will help policymakers, businessmen and analysts." - The Majalla

"Careful study of the region's history and the aftermath of the uprisings against Colonel Gaddafi suggest that peripheral forces in Libya are, as they often do, resisting impositions from the centre. That is the central thesis of a collection of essays The 2011 Libyan Uprisings and the Struggle for the Post-Qadhafi Future, edited by Jason Pack of Cambridge University . . . Pack & Co make a convincing case that central government, supported by the western allies and their aid agencies, must 'localise' (devolve) power by giving the various strongmen a stake in the administration of justice, the economy and the development of public services. Only then, they argue, can Libya build strong civic institutions to withstand greater tremors than those of the moment." - The Spectator

"Unlike . . . [other academic volumes about Libya], which all put Qaddafi on their front cover and reduce coverage of the revolution against him to their last pages, this compendium alone focuses on the forces determining Libya's future" - New York Review of Books

"Is Libya a collection of tribes that cycle through power with the old tribal configurations from the Senussi era now returning to the fore? Or is Libya a collection of individuals with resources and justice dispensed primarily according to the law? Or is Libya really three countries confederated into one? Or is it an Islamic Emirate? The resolution of the tug-of-war between the centre and the periphery will come down to what Libyans decide and which groups have the power to implement their desires. Jason Pack's The 2011 Libyan Uprisings and The Struggle for the Post-Qadhafi Future is an excellent book that will give readers the context to follow the choices as Libyans make them" - Libya Herald

"Palgrave Macmillan has published what is probably the best analytical account of the 2011 Libyan Uprising currently available . . . [Editor Jason] Pack provides us with a lengthy introduction and co-writes 2 other chapters. The book also includes contributions from several notable scholars and analysts of contemporary Libya including George Joffe (also an AA contributor), Ronald Bruce St John (author Libya: from Colony to revolution) and Noman Benotman (a former commander of the Libyan Islamic Fighting Group and now head of the Quilliam Foundation)." - All Africa

"In the wake of Libya's civil war, a number of volumes have appeared that chronicle the country's civil war and its aftermath. Few, however, will be able to match the comprehensiveness and insights of The 2011 Libyan Uprisings and the Struggle for the Post-Qadhafi Future, which provides an admirable overview and synthesis of the different aspects of the country's most recent upheaval by several noted Libya-watchers." - Dirk Vandewalle, Dartmouth College, USA

"Deeply rooted in historical research, Jason Pack's The 2011 Libyan Uprisings and the Struggle for the Post-Qadhafi Future is a work of original scholarship and analysis that sheds new light on the causes and origins of the Libyan uprisings, the continuous struggle throughout Libyan history between the center and the periphery, and the role of different domestic and international actors in the success of the revolt. The difficulties and hurdles of the transition from Jamahiriya to Jumhuriya are clearly exposed and discussed." - Karim Mezran, Senior Fellow at the Atlantic Council's Rafik Hariri Center for the Middle East, USA

"Best Libya book since the uprisings against the Qadhafi regime. Sweeping introduction will introduce you to individual issues addressed by top experts. Despite ongoing change, this book will stand the test of time." - David Mack, Middle East Institute Scholar, USA and former US Ambassador