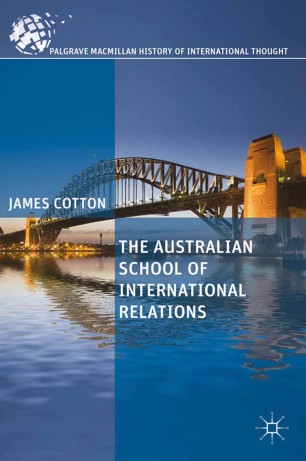 The Australian School of International Relations

This book offers the first comprehensive account of the emergence of the IR discipline in Australia. Initially influenced by British ideas, the first generation of Australian international relations practitioners demonstrated in their work a strong awareness of the unique local conditions to which their theorizing should respond.

James Cotton is Emeritus Professor of Politics, University of New South Wales, ADFA, Canberra, Australia. His most recent books are Middle Power Dreaming: Australia in World Affairs 2006-2010 (with John Ravenhill, 2012); and Australia and the United Nations (with David Lee, 2012).

"James Cotton has written a path-breaking work on the long ignored but highly significant 'Australian School' of international relations as it evolved during Australia's formative years. The book contests even destroys misperceptions previously embraced about Australia's allegedly 'exclusive' realist-rationalist approach to the IR field. It illuminates, for the first time, those historical, geographic, and cultural factors that shaped the unique richness and diversity of Australia's IR discipline." Bill Tow, Professor, Australian National University

"The history of the discipline of IR has been the subject of several new histories in the last two decades. James Cotton's book adds a valuable new chapter to this story. He does so by engaging with the work of eight neglected scholars who, individually and collectively, further complicate the simplistic 'realism vs. idealism' framing that dominated the field during the early post-World War II era. In ending his story in around 1960, he has left an opening for other disciplinary historians to examine Australian contributions to the later 'great debates.' A companion volume would be compelled to position itself in relation to this work." Tim Dunne, Professor, University of Queensland, Australia, and author of Inventing International Society: A History of the English School

"Australia has always suffered from the fear of isolation and deficient power in its Asian neighborhood. In his admirable new book James Cotton explores Australia's responses, which include submersion in the British Commonwealth, appeasement of Asian states, economic interdependence, a naïve institutionalism, and reliance on the United States. As he shows, however, none of these is fully satisfactory." Professor Richard Rosecrance, Harvard University, USA