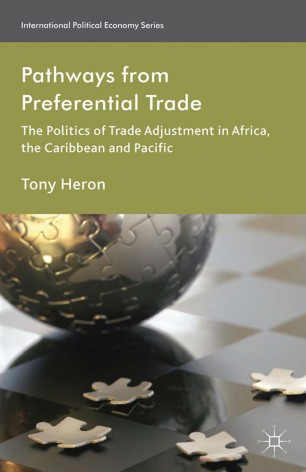 The Politics of Trade Adjustment in Africa, the Caribbean and Pacific

"For the best part of 15 years , and counting, the EU's trade links with developing countries have been overshadowed by its negotiations on Economic Partnership Agreements (EPAs) with the African, Caribbean and Pacific (ACP) states. Most EPA analysis has been by economists, even though the economics is pretty straightforward. Now, at last, is a substantial ex-post analysis from the perspective of political science, which is anything but straightforward. Tony Heron's significant contribution has laid very solid foundations. Given the duration of the negotiations and the myriad sub-groups and interests that underlie the simple acronyms 'EU' and 'ACP' the subject will inevitably attract further work but all will need to build on what Tony Heron has achieved." - Christopher Stevens, ODI London, UK

"For many years, the African, Caribbean and Pacific group of developing economies were located at the apex of the EU's 'pyramid of privileges'. Tony Heron's carefully researched project investigates from a political economy perspective why this preferential position has been eroded, focusing on the lack of clear definition of special and differential treatment in the WTO, and why ACP countries have been unable to bargain effectively with the EU." - John Ravenhill, Balsillie School of International Affairs, Canada

"This excellent book provides a richly detailed analysis of the issue of special and differential treatment for developing countries in the global trade system. For anyone wishing to understand the political economy of North-South trade negotiations in general, and the difficulties small developing countries encounter in securing positive outcomes in bilateral and multilateral negotiations more particularly, this book is essential reading." - Donna Lee, University of Kent, UK