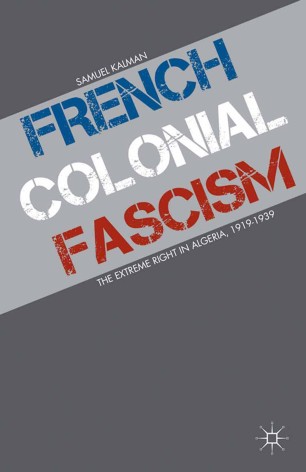 This study investigates the various extreme-rightist leagues in Algeria, with particular attention to certain key themes, among them the rabid xenophobia directed at the Jewish population and local Muslims. It demonstrates that fascism helped to construct a racial hierarchy to preserve European hegemony and a pool of cheap labor.

Samuel Kalman is Associate Professor of European History at St. Francis Xavier University in Antigonish, Nova Scotia, Canada. He is the author of The Extreme Right in Interwar France: The Faisceau and the Croix de Feu, and co-editor (with Sean Kennedy) of The French Right between the Wars: Political and Intellectual Movements from Conservatism to Fascism.

“By addressing the issue of settler fascism in colonized Algeria, Samuel Kalman delivers a much-welcome book in the historiographical field of the French Empire. … Structured along chronological lines, Samuel Kalman’s work proves very clear, detailed and useful. … Kalman’s book demonstrates how deep the tensions between the metropolitan institutions and the local administration ran, the police being described as largely in favor of the ‘fascist’ organizations.” (Claire Marynower, Journal of Contemporary History, Vol. 51 (3), 2016)

'Samuel Kalman's French Colonial Fascism is an important book that will be required reading not only for scholars and students of interwar fascism but also for researchers of the later war in Algeria.' - French History