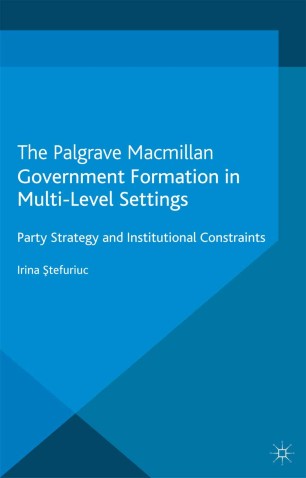 This book examines how parties negotiate coalition deals at the subnational level using the examples of Germany and Spain. In such multi-level settings, parties are present at various negotiation tables often having to make difficult choices about their role in the coalition and the relative merits of being in government over the opposition.

IRINA ?TEFURIUC is a Post-Doctoral Researcher at the Vrije Universiteit Brussels, Belgium.

The book fills an important gap in the existing literature on coalition theory by testing classical assumptions about national coalition formation on the subnational level. The original findings are based on superb theoretical reflections and a persuasive empirical analysis. This study is an inspiration for scholars of comparative government.

Government Formation in Multi-Level Settings is a timely and valuable addition to the literature on both coalition formation and on the study of politics in multi-level systems, enriching our understanding of coalition formation by considering the impact of multi-level competition. Through a careful mixed method design that examines regional coalition formation in Germany and Spain, Stefuriuc's work shows us how the multi-level environment, where parties often face conflicting goals at the regional and national levels and policy space can be complicated by a territorial dimension of competition, requires us to move beyond standard theories of coalition formation and its unitary actor assumptions. Stefuriuc's case studies of government formation, which draw on extensive interviews, are especially valuable, giving us a rare look into the processes of government formation. This should be on the bookshelf of anyone interested in understanding politics in multilevel systems.

How well do theories of government formation stack up when applied to a multi-level setting? This is the key question guiding Irina ?tefuriuc's work. Using an ingeniously crafted mixed research design, ?tefuriuc shows that coalition formation at the sub-national level cannot be analysed in isolation, but only as part of a nested two level game. This work is a must read for scholars of party politics, coalition theory and multi-level governance. It makes an important contribution to correcting the 'methodological nationalism' which has permeated so much of comparative politics scholarship in recent decades.

Wilfried Swenden is Senior Lecturer of Politics at the University of Edinburgh, UK and Co-Chair, ECPR Standing Group on Federalism and Regionalism, UK.