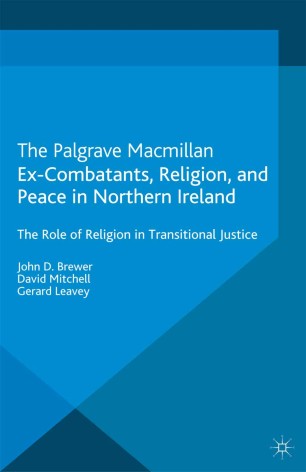 The Role of Religion in Transitional Justice

JOHN BREWER is Professor of Post Conflict Studies at Queen's University, Belfast and former President of the British Sociological Association. He is elected to four learned societies and has an honorary degree from the Brunel University for services to social science. His latest book is The Public Value of Social Science.
DAVID MITCHELL is Research Associate, School of Communication, University of Ulster at Jordanstown and former Research Assistant in the School of Sociology, University of Aberdeen. He completed his Doctorate at the University of Ulster, Magee College, where he was tutor and Associate of INCORE (Centre for International Conflict Research).
GERARD LEAVEY is Professor and Director of the Bamford Centre for Mental Health and Wellbeing at the University of Ulster, UK. He has undertaken extensive research in mental health services and has a long-standing interest in help-seeking, inequalities, religion and ethnicity.

"This book is the first of its kind. There will no doubt be further studies and publications on the subject in the future but this important and much needed text will prove to be the reference point concerning religion and ex-combatants in Northern Ireland for students and academics for many years to come."

"[This book's] main conclusions deserve to be widely disseminated and discussed."

"Based on 29 in-depth interviews with loyalists (part of the Protestant/unionist community) and republicans (part of the Catholic/nationalist community), this is the first major book to analyse the religious beliefs and practices of those who

engaged in violence, including their perceptions of how religion influenced them." - Marginalia