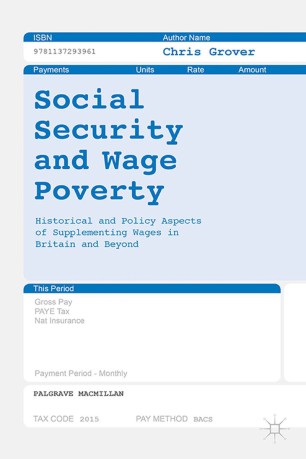 Historical and Policy Aspects of Supplementing Wages in Britain and Beyond

Social Security and Wage Poverty is the first book to comprehensively examine debates about, and the practice of, the state supplementing wages. Chris Grover charts the historical development of such policies from prohibition in the 1830s and how opposition to it was overcome in the 1970s, thereby allowing the increasing supplementation of the wages of poorly paid working people. He draws upon original archival research to show that over time wage supplements have been seen as both deeply problematic for, and of great benefit to, the economy, and to the moral and social life of wage workers. In analyzing the political economy of wage supplements, Grover also deals with gendered assumptions about the role of women in wage work and 'the family', which have framed the use and critique of wage supplements. He focuses on Britain, but also examines wage supplements in New Zealand and the USA.

Chris Grover is Senior Lecturer in Social Policy at Lancaster University, UK. Interested in political economy, he has written extensively on relationships between wage work and social security policy. His recent books include an edited collection (with Linda Piggott) on disability benefits and work, and the loaning of social security payments.

"This is an incisive and critical examination of the supplementation of low wages through tax credits and benefits for 'the working poor'. It is a topic which has always been at the heart of social policy in all capitalist economies, not least with the explosion of low paid employment in Britain in the last two decades. Chris Grover analyses the evident contradictions with enormous clarity and skill, using lots of historical detail, including some original local history and comparisons with New Zealand and the United States. It is essential reading for anyone interested in progressive reform of the welfare state." - Norman Ginsburg, London Metropolitan University, UK

"In this excellent book, which combines historical analysis with contemporary policy issues and debates, Chris Grover reminds us that the use of wage supplements for the dual purposes of sustaining employment and the alleviation of in work poverty among the low paid have long been, and remain, a key element of many welfare states. Considering policy developments from the 1790s through to the ongoing roll out out of Universal Credit his critical voice combines a political economy approach with a gendered analysis to conclude that wage subsidies are primarily a mechanism designed to manage both the inequalities and demand for profit required by liberal market economies. This is a detailed, well argued and important book that deserves a wide readership." - Peter Dwyer, University of York, UK
"Chris Grover's book is the product of an extensive scholarly and archival project of considerable contemporary significance. Its continuous historical range (from the late C18th to the first Conservative Budget of 2015), scope (agricultural and industrial workers) and policy diversity (from poor relief through supplements to credits) are encompassing, impressive and illuminating, as is its commitment to international comparison. The outcome is a meticulously researched insightful political-economic analysis of the multiple tensions that confound past and present policy endeavours alike, as they struggle to manage or mask intolerable poverty whilst maintaining immiserating low-end wages." - Ross Fergusson, The Open University, UK
Buy options