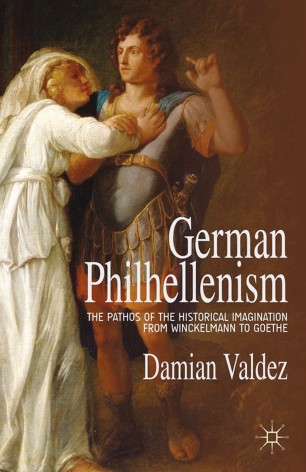 The Pathos of the Historical Imagination from Winckelmann to Goethe

Philhellenism the fascination with the art, politics, religion and society of ancient Greece- is a powerful and compelling phenomenon in German culture and intellectual history, creating a language and a series of key ideas that were to exert a continuous influence on German thought, aesthetics and politics well into the twentieth century. In this book Valdez examines the first generation of German Philhellenes from Winckelmann to Goethe. He shows how German Philhellenism was torn between the search for a historical whole which could explain and encompass Greek excellence, and the desire to incorporate individual aspects of Greece in a wider ethical and artistic enterprise, and finally, to give it a place in the history of freedom itself. Valdez also shows that German philhellenic ideas grew out of a dialogue with French and British ideas and historiography. He charts how the fascination with Greek antiquity was reflected in theatre and literature and how the longings and idealisation of Philhellenes clashed with the more critical and sober historians of the Enlightenment. The book also explains how the search for the historical reality of philhellenic ideals created intense emotional and ideological conflicts about the unique nature of male friendship in ancient Greece and about the position of women in ancient Athens.

'A fascinating study of eighteenth-century German Philhellenism and of the debates which it generated in their social and political context. Damian Valdez's book is full of illuminating insights into the writings of Winckelmann, Herder, Schiller and Goethe.' - Joachim Whaley, Professor of German History and Thought at the University of Cambridge, UK, and author of Germany and the Holy Roman Empire, 1493-1806 (2012)

"Valdez intricately maps out the colourful and densely populated map of German philhellenism in the late eighteenth century. This rich and important book provides us with a fuller and more sophisticated picture of German engagements with ancient Greece. Valdez elegantly examines the significance of German philhellenism for Enlightenment historiography and eighteenth-century literature and politics, and his book will find a wide and appreciative readership." Daniel Orrells, Associate Professor, The University of Warwick, UK