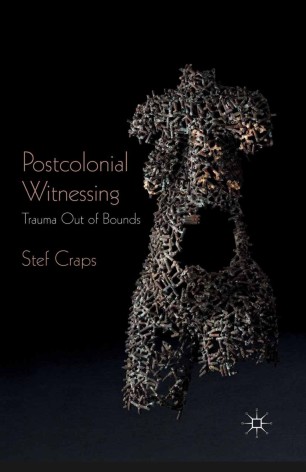 Trauma Out of Bounds

Postcolonial Witnessing argues that the suffering engendered by colonialism needs to be acknowledged more fully, on its own terms, in its own terms, and in relation to traumatic First World histories if trauma theory is to have any hope of redeeming its promise of cross-cultural ethical engagement.

STEF CRAPS teaches English at Ghent University, Belgium, where he also directs the Centre for Literature and Trauma. He is the author of Trauma and Ethics in the Novels of Graham Swift: No Short-Cuts to Salvation (2005).

One of Times Higher Education's Books of 2013

"Bridging the gap between Jewish and postcolonial studies, Stef Craps's new postcolonial reading of the work of Sindiwe Magona, David Dabydeen, Fred D'Aguair, Caryl Phillips and Anita Desai covers exciting new ground in trauma theory. Challenging the hegemonic framings of the dominant 'trauma aesthetic,' Craps broadens our understanding of traumatic experience by examining literary works that depict life under South African apartheid, the Middle Passage, the links between histories of black and Jewish suffering and those between the Holocaust and colonialism. This is a fine study and a welcome addition to the field of trauma studies." - Dr Victoria Burrows, English Department, The University of Sydney, Australia

"In this beautifully and clearly written book, Stef Craps leads trauma theory away from its Eurocentric past and towards a decolonized future. Arguing that the traumas of non-Western populations should be acknowledged for their own sake and on their own terms, Postcolonial Witnessing demonstrates through its exemplary discussion of literary texts including the works of Anita Desai and Caryl Phillips, how literary analysis can become a part of that process. Timely, provocative and destined to be widely read, this book makes a path-breaking contribution to memory, trauma, and literary studies." - Professor Susannah Radstone, University of East London, UK

"'Stef Craps's excellent study calls for the decolonizing of trauma theory and begins from the premise that its founding texts have failed to live up to the promise of cross-cultural ethical engagement. In a carefully argued thesis, he accuses trauma theory of Eurocentric bias in four crucial ways . . . Overall, this short book advances an eloquent plea to rethink trauma from a postcolonial perspective in order to listen to the suffering of Others beyond the western purview and, thereby, in Craps's words, "remain faithful to the ethical foundation of the field"." - Journal of Postcolonial Writing

'Despite the seriousness of the topic, the clarity and flow of Craps's writing makes Postcolonial Witnessing a joy . . . This is a book that engages with current debates in a lively and interesting way and is sure to be of interest to scholars of trauma, postcolonialism, cultural memory studies and related fields. Its clear structure and thorough consideration of foundational and recent literature, including an excellent index and bibliography, will also make it a useful text to those who are new to the topic. In fact, the book's strong argument, clear structure and engaging prose make Postcolonial Witnessing an example of what an academic text should be.' - Dialogues on Historical Justice and Memory

''Stef Craps' Postcolonial Witnessing: Trauma Out of Bounds is a text that has, without a doubt, pushed the field of trauma studies towards a more positive and critical direction of analysis and ethical engagement . . . A fundamental leap in the right dirction, Postcolonial Witnessing opens a path for new, more generative theorizations of trauma.'' - Emmanuel Martinez, Rutgers, The State University of New Jersey, US

"Stef Craps's Postcolonial Witnessing: Trauma Out of Bounds attempts to adapt the rather recent advances of trauma theory to postcolonial theory and despite its flaws, it is one of the more important texts on trauma theory in recent time... overall it is a very strong look at trauma studies." Henry James Morello, The Comparatist

Shortlisted for the 2014 ESSE Book Award

"Craps makes a compelling case for the need to expand the current event-based model to 'alternative conceptualizations of trauma' proposed by postcolonial critiques, such as 'insidious trauma,' 'continuous traumatic stress,' 'cumulative trauma,' or 'oppression-based trauma.'... His skillful analysis of these texts is particularly relevant for scholars of literature, but Craps also weaves into his readings insights gained from the theoretical literature... Craps' fine study..." Björn Krondorfer, theologie.geschichte

'Stef Craps's Postcolonial Witnessing: Trauma Out of Bounds serves as a wonderful starting point for anyone interested in recent critical paths in trauma studies. Not only does it give a good overview and critique of foundational early work by such scholars as Cathy Caruth, Shoshana Felman, Dori Laub, Dominic LaCapra, and Geoffrey H. Hartman, but it also brings together the work of many recent scholars who, like the author of this monograph, have noted trauma studies' exclusions of various groups and types of traumatic experiences. In covering this vast amount of critical territory and doing so with adept and cogent arguments, Postcolonial Witnessing proves itself a particularly useful and important introduction to the field for both students and other scholars seeking entry." - Veronica Austen, Canadian Review of Comparative Literature / Revue Canadienne de Littérature Comparée

". . . successful engagement with postcolonial theory and memory studies . . . There is an unquestionable sincerity of critical engagement with the very vast body of literature both critics discuss. They explain theoretical ideas with a clarity and conciseness that indicates their extensive knowledge of scholarship in the area. In the tradition of effective postcolonial critique, the authors also mention the literary and social implications of their work. For Craps this involves an 'inclusive and culturally sensitive trauma theory' that opens up the possibility of 'a more just future' . . . Scholars and students of contemporary postcolonial literature will find these books useful as maps of the fields of cross-cultural and memory studies." - Kanika Batra, Wasafiri