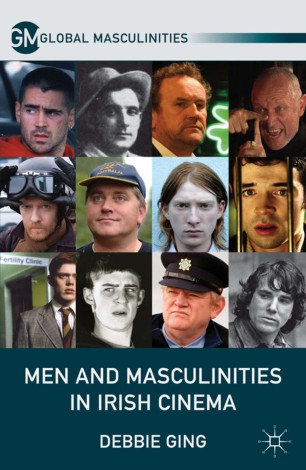 Men and Masculinities in Irish Cinema

Spanning a broad trajectory, from the New Gaelic Man of post-independence Ireland to the slick urban gangsters of contemporary productions, this study traces a significant shift from idealistic images of Irish manhood to a much more diverse and gender-politically ambiguous range of male identities on the Irish screen.

DEBBIE GING is Lecturer in film and media studies and Chairperson of the MA in Film and Television Studies at Dublin City University's School of Communications, Ireland. She has published extensively on issues of gender in the media and is co-author of Transforming Ireland: Challenges, Critiques, Resources (2009).

'This book is a significant addition to the literature on cinematic Irishness and its focus on the representation of masculinity sets it apart from previous scholarship. An impressive range of case study films and Ging's adroit ability to set them in dynamic comparative relation yields a new and timely history of Irish cinema focused on the interplay of national and gendered identities. This will be a standard text in Irish media studies.'

'Debbie Ging has written an important, timely and sharply focused study which delineates the shifting contours in the representation of masculinity in Irish cinema. Covering the whole of its history, Ging relates the changes in cinematic masculinities to broader social and cultural debates and shows the importance of images of men to the construction of national identities. This ambitious study fills an important gap in the literature on Irish cinema and makes a thoughtful contribution to the expanding corpus of studies of men on film.'

'Long marginalized in stereotypic representations, the emergence of a distinctively Irish cinema also heralded new, locally produced images of Irish masculinities that span a far wider range than before. Debbie Ging uses this history as a lens through which to view the emergence of Ireland itself as a significant cultural force in Europe and the world - and a contributor of gendered identities that are both original and worthy of emulation.'