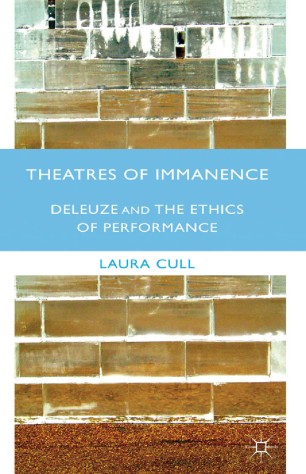 Deleuze and the Ethics of Performance

Theatres of Immanence: Deleuze and the Ethics of Performance is the first monograph to provide an in-depth study of the implications of Deleuze's philosophy for theatre and performance. Drawing from Goat Island, Butoh, Artaud and Kaprow, as well from Deleuze, Bergson and Laruelle, the book conceives performance as a way of thinking immanence.

'Laura Cull breaks with the mutual distrust between theater and philosophy that has kept both disciplines from recognizing their myriad entanglements. The result is a creative approach to contemporary theater that also sheds new light on Gilles Deleuze.' - Martin Puchner, Byron and Anita Wien Professor of Drama, Harvard University, USA

'Given Deleuze's growing prominence in performance analysis, this rigorous study of his philosophical notion of immanence is timely and valuable to the discipline... In addition to Cull's, often revisionary, analyses of the theatre practices themselves, which are valuable contributions to avant-garde scholarship in their own right, this is also an account of how performance can sometimes 'think' philosophically for itself, as Cull describes it, in addition to its capacity to draw on and exemplify existing theories.' - Liz Tomlin, NTQ

'In Laura Cull's book, Theatres of Immanence: Deleuze and the Ethics of Performance, complex Deleuzian concepts are injected with dramatic life and manipulated with great ease and originality. The book pays a beautiful tribute to the fact that Deleuze's concepts have also inspired artists and have brought some performances to life'. - Liza Kharoubi, Avignon University, France