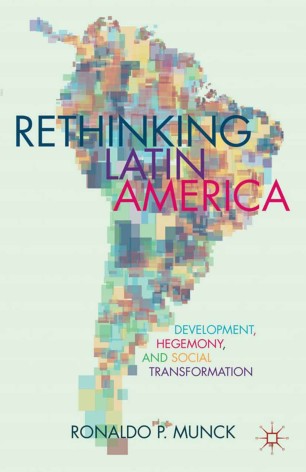 In a subtle but powerful reading of the shifting relationships between development, hegemony, and social transformation in post-independence Latin America, Ronaldo Munck argues that Latin American subaltern knowledge makes a genuine contribution to the current search for a social order which is sustainable and equitable.

'Munck cleanly and clearly summarizes the strengths and limitations of past development theories . . . Recommended.' - Choice

"Ronaldo P. Munck has achieved a remarkable synthesis of Latin American history from a critical global perspective. Inspired by the concepts and categories of Antonio Gramsci and José Carlos Mariátegui, this book is an important contribution to rethinking, reinventing, and re-imagining Latin America." - Michael Löwy, author of Marxism in Latin America, from 1909 to the Present

"Rethinking Latin America is a timely and critical study by one of the leading scholars worldwide on Latin American and international affairs. Sweeping and ambitious, the work provides a fresh interpretation of five centuries of development and social change in Latin America and five decades of academic and political debate on the region in light of its increasing importance in the global system." - William I. Robinson, Professor of Sociology, Global Studies, and Latin American Studies, University of California at Santa Barbara, USA, author of Latin America and Global Capitalism

"This is a fascinating, brilliantly conceived, and highly creative work that examines the current Latin American reality in terms of the different approaches to development and growth the region has undergone. I would recommend this book to anyone with an interest in different models of development, new Marxist thought, or the creative imagining of what a new reality could look like in Latin America. Indeed, Munck argues that the alternative intellectual and developmental model in formation in Latin America could also serve as a model for Europe and elsewhere." - Harry E. Vanden, University of South Florida, USA, author of National Marxism in Latin America and co-editor of Social Movements and Leftist Governments in Latin America

"Rethinking Latin America is a magnificent study that promises to set a benchmark in our efforts to engage with Latin America in this new century. Munck proposes a fresh interpretation of five centuries of development and social change in Latin America and five decades of academic and political debate on the region in light of its increasing importance in the global system." - Global Discourse

"It is a tour de force, comprehensive and sure-footed as it weaves its way through an immense and varied literature on the region's economic, social and political development. No one can fail to be surprised by the subtle, generous and always authoritative treatment of issues and themes that have elicited fierce debates. Munck eschews totalizing visions, whether of dependency, modernizations, nationalism or globalization, managing to focus on what are essential and necessary features of each of these approaches while espousing an approach that is more richly variegated." - European Review of Latin American and Caribbean Studies