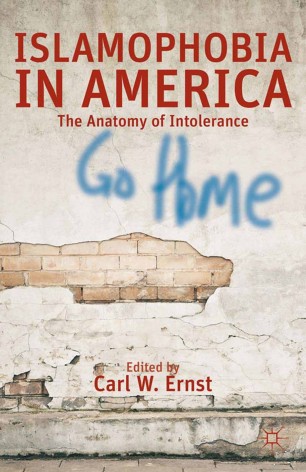 The Anatomy of Intolerance

Islamophobia in America offers new perspectives on prejudice against Muslims, which has become increasingly widespread in the USA in the past decade. The contributors document the history of anti-Islamic sentiment in American culture, the scope of organized anti-Muslim propaganda, and the institutionalization of this kind of intolerance.

"In this must-read deconstruction of the psychosis called 'Islamophobia,' editor Ernst offers readers a conversation from the diverse voices that discuss Islam in the US. Five insightful essays make up this time exchange which provides historical contextualization, [analysis of] the unexamined victimhood of women, a broader global perspective, and a case study in citizenship and belonging . . . Highly recommended." CHOICE

"Islamophobia in America: The Anatomy of Intolerance is an excellent and timely addition to the growing scholarship on the academic study of Islamophobia. Professor Ernst has compiled the contributions of well-known scholars and academics in the field, providing insights on the subject that hasn't been dealt with in other works on the topic." - Edgar Hopida, Senior Consultant of the San Diego Chapter of the Council on American-Islamic Relations (CAIR-San Diego)

"No other book addresses the deep structure of Islamophobia, a feverish force of aggression against Islam, and Muslims, that blights the Euro-American public square. The contributors to this volume are all well known for their advocacy of a broad-gauged perspective on American Muslims. Not outsiders but insiders, Muslims are the woof and warp of the piebald social fabric that makes America American." - Bruce B. Lawrence, author of New Faiths, Old Fears: Muslims and Other Asian Immigrants in American Religious Life

"Islamophobia in America: The Anatomy of Intolerance is paradigm-turning theorization which redirects analysis of Islamophobia from 'what is it about Islam' to 'what is it about America' that triggers fear and bigotry. The contributions provide brilliant insights into the trigger mechanism of state-building, militarism, media, race, the enmeshment of religion and national purpose, and the contested and unfinished project of making America." - Suad Joseph, University of California, Davis, USA

"Fear of Islam is both quite old and quite new. In our own time and in the USA, the fear of militant Islam began to take on explicit and particular shapes in 1979, during the Iranian Revolution with the taking of American hostages, which brought nightly coverage of Islam holding American officials hostage in Tehran on the ABC News program Nightline. With the expansion of cable news networks and the Internet, Islam has been represented as hostile to Americans on a constantly increasing basis ever since. The events of 9/11 simply compounded this. Situating American Islamophobia in its historical context, this important volume contributes to our understanding of a problem so rampant today it is prevalent even in the discourse of candidates seeking public office." - Richard C. Martin, Emory University, USA, editor of Review of Middle East Studies

"Carl Ernst, with his informed perspective and years of teaching Islamic studies both in the US and around the world, has provided a timely and crucial rational analysis and critically comparative study of an otherwise highly charged political issue. This book should be required reading for local, state, and national policy makers as well as anyone who claims interest in interfaith dialogue and the academic study of religion." - Brannon Wheeler, Director, Center for Middle East and Islamic Studies, US Naval Academy, USA