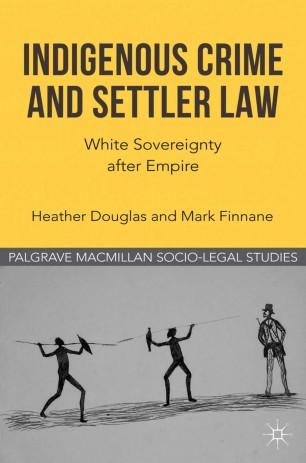 In a break from the contemporary focus on the law's response to inter-racial crime, Heather Douglas and Mark Finnane examine the foundations of criminal law's response to the victimization of one Indigenous person by another. Against the changing background of settler encounters with Australian Indigenous peoples, they show that the question of Indigenous amenability to imported British criminal law in Australia was not resolved in the nineteenth century and remains surprisingly open. Through a study of the policing and prosecution of Indigenous homicide, the book demonstrates how criminal law is consistently framed as the key test of sovereignty, whatever the challenges faced in effecting its jurisdiction. Drawing on a wealth of archival and case material, the authors conclude that settlers and Indigenous peoples still live in the shadow of empire, yet to reach an understanding of each other.

HEATHER DOUGLAS is a professor at the TC Beirne School of Law, University of Queensland, Brisbane, Australia.

MARK FINNANE is ARC Australian Professorial Fellow and Chief Investigator at the ARC Centre of Excellence in Policing and Security, Griffith University, Australia.

"Heather Douglas and Mark Finnane expose the myth of 'perfect sovereignty' in Australia in this important book. Their meticulous historical study demonstrates that although, according to international law, the English acquired sovereignty over the entire continent upon settlement...the exertion of sovereignty and the exercise of criminal jurisdiction over Indigenous people has been, in practice, uneven, piecemeal and imperfect." - Tanya Mitchell, Current Issues in Criminal Justice, Volume 25 Number 2
Buy options