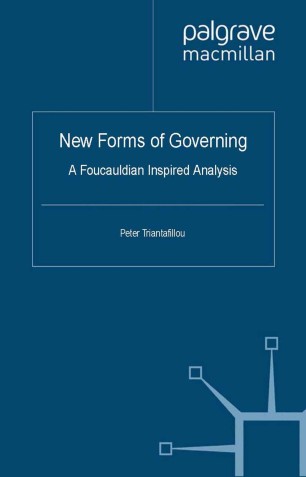 Triantafillou analyzes the changing ways of governing the public sector and the ways in which public organizations have become the target of interventions seeking to improve their efficiency and quality. He exposes how political and social science theories were adopted in often unpredictable ways in the process of reforming the public sector.

PETER TRIANTIFILLOU is Associate Professor of Politics and Administration, Roskilde University, Denmark. His research deals with the exercise of power and freedom in public organizations and welfare policies. He has co-edited (with Eva Sørensen) The Politics of Self-Governance and (with Jacob Torfing) Interactive Policymaking, Metagovernance and Democracy.

'Peter Triantafillou demonstrates the usefulness of an open-minded approach to reading Foucault, enabling a non-dogmatic interpretation regarding matters of governing. The Foucauldian must be ever vigilant of taken-for-granted presuppositions especially about Foucault. Triantafillou's integrates into his conversation systems theory, the Frankfurt school, literature on democratic participation and the recent governance literature, turning diverse concerns into an intelligent and edifying reflection. Not content to merely rehearse the mainstream consensus, Triantafillou takes a Foucauldian-style critical approach that surprises the intellect, delights one's critical sensibilities, and even confronts at least for me my own understanding of Foucault. Many new and interesting questions are put on the table, but its foremost question laid out a new problematic which I will put this way: Why has the jumbled neoliberal narrative on government been so difficult to contest?'

-Hugh T. Miller is Professor in the School of Public Administration at Florida Atlantic University. He is author of Governing Narratives: Symbolic Politics and Policy Change, published in 2012 by University of Alabama Press.

'Peter Triantafillou's book explores a number of Michel Foucault's conceptual devices with unusual clarity. He also demonstrates a strong command of the empirical details of certain new modes of managing/governing shared by many regimes 'with quite differing polities and policymaking traditions', such as public-private partnerships and performance management, in, for example, the fields of public health and education.

The two elements by themselves are deftly handled, but it is the manner in which Triantafillou blends them into a distinctive style of investigation that should prove particularly attractive to scholars, students, and practitioners.'