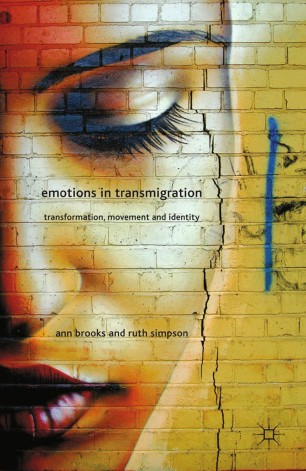 The book explores the intersection of emotions and migration in a number of case studies from across the USA, Europe and Southeast Asia, including the transmigration of female domestic workers, transmigrant marriages, transmigrant workers in the entertainment industry and asylum seekers and refugees who are the victims of domestic violence.

ANN BROOKS is a Visiting Scholar in the Department of Sociology at the University of California, Berkeley, USA, from 2011 to 2012. She was appointed as Professor of Sociology and Cultural Studies at the University of Adelaide, Australia in 2008 and she is part of the ARC Centre of Excellence for the History of Emotions 2011-17. Her recent books include Social Theory in Contemporary Asia: Intimacy, Reflexivity and Identity (2010); Gender Emotions and Labour Markets (2011). Forthcoming books include Popular Culture, Hybridity and Identity (2013); and Governing the Citizen-Consumer: Reflexivity, Citizenship and the State (2013)
RUTH SIMPSON is Professor Management at Brunel Business School, UK. She has published widely in the area of gender and management education, gender and emotions and gender and careers. Recent books include Men in Caring Occupations: Doing Gender Differently; Gendering Emotions in Organizations; Revealing and Concealing Gender in Organizations and Dirty Work: Concepts and Identities.