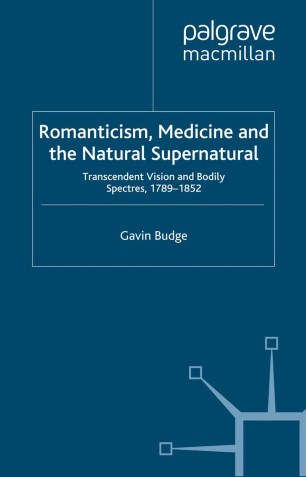 Romanticism, Medicine and the Natural Supernatural

This fascinating interdisciplinary study examines the relationship between literary interest in visionary kinds of experience and medical ideas about hallucination and the nerves in the first half of the nineteenth century, focusing on canonical Romantic authors, the work of women writers influenced by Romanticism, and visual culture.

GAVIN BUDGE is a Senior Lecturer in English Literature at the University of Hertfordshire, UK. He is the author of Charlotte M Yonge: Religion, Feminism and Realism in the Victorian Novel (Lang 2007), and editor of a collection of essays, Romantic Empiricism: Poetics and the Philosophy of Common Sense.

“Literary critics and historians of medicine will learn much from Gavin Budge’s wide-ranging and erudite study, which argues that Romantic medicine influenced writers from Coleridge through Hazlitt to Martineau, Stowe through Carlyle to the Pre-Raphaelites. … I learned a good deal from this study.” (Richard C. Sha, The British Society for Literature and Science, bsls.ac.uk, December, 2015)

"Budge's provocative attention to the productive nature of illness is just one of the ways that this impressive monograph advances Romantic studies... What is most remarkable about this study is the impressive research that grounds it. Indeed, Budge demonstrates an immense wealth of learning in English and American nineteenth-century literature, the history of medicine and religion, and criticism from a range of perspectives about his topics... even when Budge gestures to familiar critical and literary territory, he offers fresh interpretations of his topic... Overall, Romanticism, Medicine and the Natural Supernatural is a welcome addition to the growing body of Romantic criticism on medicine and nineteenth-century literature. By approaching bodily illness as a source of literary inspiration,

providing an enormously detailed literary, historical, and critical context for his readings, and expanding our notion of 'Romantic' to cover a wide range of years, Budge encourages his audience to reconsider the many ways that nineteenth-century writers

imagined their bodies in relation to the rapidly changing and increasingly authoritative medical views of them." Michelle Faubert, 1650-1850