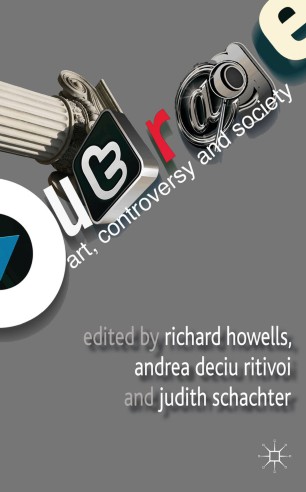 A study of controversy in the arts, and the extent to which such controversies are socially rather than just aesthetically conditioned. The collection pays special attention to the vested interests and the social dynamics involved, including class, religion, culture, and - above all - power.

RICHARD HOWELLS is Reader in Culture, Media and Creative Industries at King's College, London, UK, where he specialises in visual and popular culture. In 2004 he was Distinguished Visiting Professor at the Center for the Arts in Society at Carnegie Mellon University. His books include The Myth of the Titanic (1999 and 2012) and Visual Culture (2003 and 2012, also published in Chinese and Korean). He has published widely in journals in including Screen, Celebrity Studies, Word & Image, the European Review, and the Historical Journal of Film, Radio and Television.
ANDREEA DECIU RITIVOI is Associate Professor of English and Rhetoric at Carnegie Mellon University, USA. Between 2008–2011 she was co-director (with Judith Schachter) of the Controversy and Public Art project with the Center for Arts in Society at Carnegie Mellon University. Her publications include Yesterday's Self: Nostalgia and the Immigrant Identity (2002), Interpretation and Its Objects: Studies in the Philosophy of Michael Krausz (2003), Paul Ricoeur: Tradition and Innovation in Rhetorical Theory (2006), and many articles on narrative and identity, hermeneutics, and argumentation.
JUDITH SCHACHTER is Professor of Anthropology and History at Carnegie Mellon University, USA. Former Director of the Center for the Arts in Society, she conducted the 'Controversy Initiative' with Professor Andreea Ritivoi. Schachter's publications include: Ruth Benedict: Patterns of a Life, Kinship with Strangers: Adoption and Interpretations of Kinship, and Envisioning Homestead, with Charlee Brodsky. She was co-editor of Cultures In/Out of Time, a collection of essays on arts in society. In addition, she has published articles from her recent work on American imperialism in Hawaii.