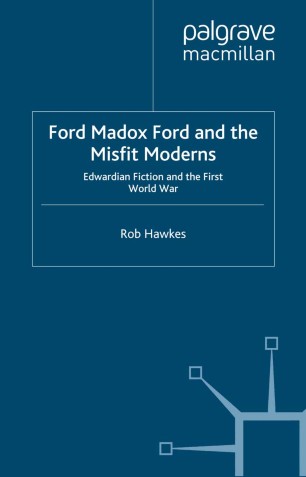 Ford Madox Ford is a major modernist writer, yet many of his works do not conform to our assumptions about modernism. Examining ways in which he, alongside other 'misfit moderns', undermines 'stabilities' we expect from novels and memoirs, this book poses questions about the nature of narrative and the distinction between modernism and modernity.

“Ford's works are notoriously resistant to conventional notions of genre, oblivious to the canonical distinctions between realism and modernism, or materialism and fantasy, or fiction and autobiography. In this wide-ranging survey of the many ways in which Ford fails to 'fit' into the conventional categories of literary analysis, Rob Hawkes shows that the problem of how to appreciate Ford extends far beyond notions of genre to include fundamental elements of narrative itself.” (Gene M. Moore, Ford Madox Ford Society Newsletter, Issue 19, 2013)

“...Hawkes offers a valuable addition to Ford criticism and to modernist criticism in general by virtue of his strong emphasis on the narrative practices of misfit moderns and on those practices' destabilizing effects.” (Wyatt Bonikowski, Suffolk University, Modernism/modernity, Vol. 20 (3), September, 2013)