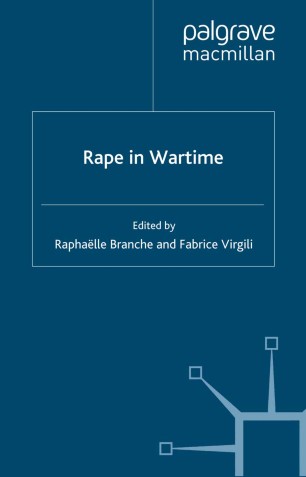 This collection offers a new reflection on rape in war time through 15 case studies, ranging from Greece to Nigeria. It questions the specificity of rape as a universal transgression, its place in memories of war, its legacies, including children born from rape, and the challenge of writing about intimate violence as both a scientist and a human.

'Although war facilitates rape, it does so in distinctive contexts and to varying levels in different settings. Rape in Wartime examines perpetrators within the legitimate military services, paramilitary groups, guerrilla units, and civilians. Similarly, the book highlights how sexual violence in conflict has a multitude functions.

Branche and Virgili's volume illustrates what rigorous historical scholarship about rape in times of conflict can tell us about the contexts that trigger such atrocities. Importantly, it also explores how sexual violence is not a feature of all conflicts.'

'There is a pressing need for substance in this increasingly emotional debate. Rape in Wartime contributes that substance in a collection of meticulously researched, carefully argued, and painstakingly translated essays from diverse scholars who studied rape globally and historically. It provides a brilliant combination of military history, anthropology, and legal studies that are perfectly balanced by a feminist perspective. This anthology is an ideal work for commissioned and non-commissioned officers who are facing cultural reform regarding gender roles in the military and the integration of women into combat units. Rape in Wartime is a substantive, concise, and readable book on women in combat and rape that occurs during wars.' - Military Review