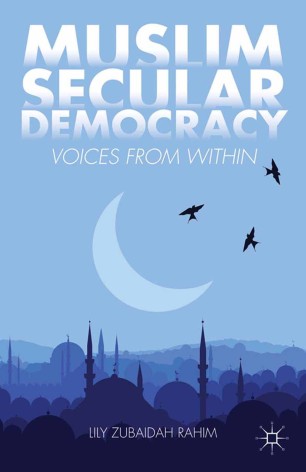 The book offers a nuanced and innovative analyses of the emergence of an inclusive secular democratic state paradigm which incorporates the sacred within the framework of secular democracy in the Muslim World.

Lily Zubaidah Rahim is an associate professor of Government and Interantional Relations at University of Sydney.

"The great Syrian philosopher Sadik Jalal al-Azm controversially argued in 1967 that the Arab world and Islamic civilization could progress only by embracing secularism, gender equality, democracy, and modern scientific rationalism. Almost half a century later, in this brave and thoughtful collection, we not only see that engagement beginning to thrive, we see the concepts of equality, democracy, rationalism, and, above all, secularism being challenged, deepened, and developed. The implications of the arguments advanced here are far-reaching, and not just for the world of Islam and those concerned with its fate. These are matters of wide human significance and general, universal importance." - Clive Kessler, Emeritus Professor, The University of New South Wales, Ausralia

"This book is a nuanced exploration of a complex and timely phenomenon. By her judicial blend of theory and case studies, Lily Zubaidah Rahim presents an informative and exciting collection on the interplay between Islamic religiosity, secularism and democracy. This is a fascinating account of how Muslim intellectuals and activists break the mold and challenge pre-conceptions - a significant contribution to the literature. Muslim Secular Democracy is a must-read." - Shahram Akbarzadeh, Australian Research Council Future Fellow, University of Melbourne, Australia