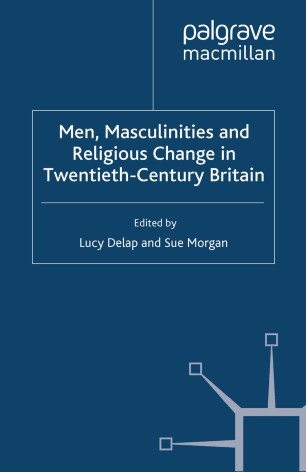 Charting the growing religious pluralism of British society, this book investigates the diverse formations of masculinity within and across specific religions, regions and immigrant communities. Contributors look beyond conventional realms of worship to examine men's diverse religious cultures in a variety of contexts.

“Masculinity and religious change in the twentieth-century United Kingdom is the topic of this collection of essays, edited by the historians Lucy Delap and Sue Morgan and presenting the results of a conference held in 2012. … the book is very readable and gives an interesting insight into the cultural, political and social developments in an increasingly multicultural British society.” (Yvonne Maria Werner, Theology and Sexuality, Vol. 21 (1), 2015)

"An engaging and thought-provoking account of the dynamic relationships between a range of faith - and no faith - traditions and diverse and internally complex articulations of masculinity. Focusing on 'religion' broadly conceived - from belief to institutional affiliation and beyond - and employing a variety of approaches and methodologies, this is crucial reading for anyone interested in the history of masculinity or of religion and secularization in modern Britain." - Professor Joy Dixon, University of British Columbia, Canada

'This is a ground-breaking collection. Masculinity and religiosity provide fascinating vantage points from which to view the assumptions and established narratives and chronologies of recent British history. The authors throw new questions into the mix. If spirituality was increasingly upheld by women and religious identities became feminised in the twentieth century, how should we understand men's investments in religion? How does attention to spirituality change our ideas about masculinity, the supposed shift from the heroic manliness of the Edwardian adventurer, to the mid-century domesticity of the 'little man' and more psychological ideas of the self? Men, Masculinities and Religious Change shows the century in a different light, demonstrating the persistence of traditional modes of piety and ideals of manly conduct while revealing the variety of religious affiliations and identities, in the process revealing the complex shapes of modernity in Britain.' - Professor Michael Roper, University of Essex, UK