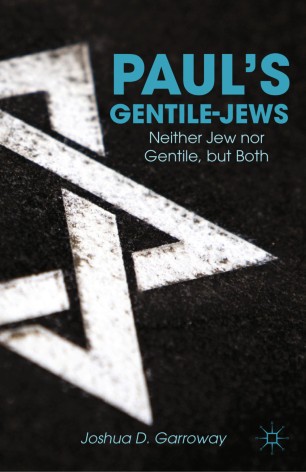 Neither Jew nor Gentile, but Both

Drawing upon the concepts of cultural and linguistic hybridity developed by Homi Bhabha, Salman Rushdie, Mikhail Bakhtin, and others, Garroway suggests that the first generation of Gentile converts were uncertain whether they had become Jews or remained Gentiles in the wake of their baptism into Christ.

"This is a field-changing book. Garroway has solved the problem of what to call the members of the communities Paul founded, in our language but from Paul's point of view: they are an unstable hybrid, Gentile-Jews, a category that played a significant role in the later emergence of Christianity as a third entity. He has also shown that Paul, even as a cultural critic, did not attempt to eliminate the ethnocentricity or nationalism in the definition of 'the Jew' - rather, Gentiles had to be Jews to enter the redefined 'Israel.' Faith made them really Jews, though in an unstable way. Anyone interested in Paul should read this engaging study." - Adela Yarbro Collins, Buckingham Professor of New Testament Criticism and Interpretation, Yale University Divinity School

"Paul's Gentile-Jews is a clear, lucid, creative, and provocative read. Using the work of Homi Bhabha and Mikhail Bakhtin, Garroway argues for an entirely new way to understand the transformed identity of those Gentiles who accepted Paul's message about Christ. Given the number of studies on Paul, it is hard to avoid hackneyed discussion. But Garroway's work is highly original, worth the time of anyone interested in Paul for that matter, anyone interested in the early identity formation of those whom we would later call Christians." - Pamela Eisenbaum, associate professor of Biblical Studies and Christian Origins at Iliff School of Theology in Denver, Colorado, author of Paul Was Not A Christian: The Original Message of a Misunderstood Apostle

"In this remarkable study, Garroway proposes a provocative and original way to understanding Paul's puzzling descriptions of his Gentile converts' status in relation to Israel and the Jews. What pleasure to read a book that is theoretically sophisticated, exegetically ingenious, and entertainingly written!" - Jeremy F. Hultin, associate professor of New Testament, Yale Divinity School