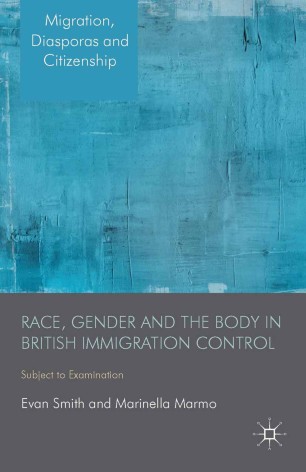 Race, Gender and the Body in British Immigration Control

This book analyses the practice of virginity testing endured by South Asian women who wished to enter Britain between the late 1960s and the early 1980s, and places this practice into a wider historical context. Using recently opened government documents the extent to which these women were interrogated and scrutinized at the border is uncovered.

Evan Smith is Vice-Chancellor's Postdoctoral Research Fellow in the School of International Studies at Flinders University, Australia. He has written widely on the British immigration control system, the politics of race in Britain and the British far left.

"An important and revelatory study of a shameful episode in 20th century British immigration history that was shaped by Imperial racism." - Alan Travis, Home Affairs Editor, The Guardian

"It is impossible to over-estimate the importance of Smith and Marmo's study. Their chilling documentation of abuses permitted and vigorously denied by the Home Office represents feminist scholarship at its best." - Philippa Levine, Mary Helen Thompson Centennial Professor in the Humanities, University of Texas at Austin, US

"This historical study examines the intertwining of 'race', gender and the body in the application of immigration controls in Britain since the 1970s. Drawing on research in British Government archives, 'Race, Gender and the Body in British Immigration Control' begins with the shocking case of virginity testing of a 35 year old woman, who arrived at Heathrow Airport, London in 1979 to marry her fiancé. Smith and Marmo unpick these obscene practices as symptomatic of the de-humanising treatment of migrants from the former colonies and the dense racialized, sexual politics of British border controls. Crucially, Smith and Marmo also explore the incredible resistance of South Asian women and anti-deportation activists against the discriminatory practices of the British state. This important new history of immigration control speaks directly to the contemporary situation of border securitisation in Britain and beyond. It will be of interest to, and will be widely read by all interested in migration, citizenship, human rights, post-colonial migration, and histories of resistance to unjust border controls."