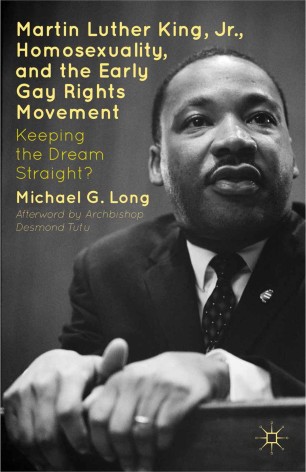 Martin Luther King, Jr., was not an advocate of homosexual rights, nor was he an enemy; however both sides of the debate have used his words in their arguments, including his widow, in support of gay rights, and his daughter, in rejection. This fascinating situation poses the problem that Michael G. Long seeks to address and resolve.

"Michael G. Long's Martin Luther King Jr., Homosexuality, and the Early Gay Rights Movement is a must read for anyone who lives at the intersections of race, religion, and LGBT issues today. Carefully researched and thoughtfully argued, this book allows Martin Luther King Jr.'s own words about homosexuality and his actions towards his openly gay colleague Bayard Rustin to speak for themselves, while at the same time imagining how King's personalist philosophy might transcend the limitations of his own social context. A valuable resource for current debates over marriage equality and LGBT civil rights." - Patrick S. Cheng, associate professor, Historical and Systematic Theology, Episcopal Divinity School

"For too long Martin Luther King Jr.'s legacy has been uncritically co-opted by groups on both sides of the GLBT issue. Based solely on what is known to this point in King studies this seminal, powerfully provocative, gripping, courageous, superbly written and instructive book by Michael G. Long clears the fog regarding what King thought about homosexuality and gay rights. Those who presume to appropriate King's legacy in favor of or against homosexuality and gay rights can now know for the first time what he actually said, and what they can reasonably claim in support of their stance. An absolute must read for persons interested in the truth of the matter, rather than guess work and speculation." - Rufus Burrow, Jr., author of God and Human Dignity: The Personalism, Theology, and Ethics of Martin Luther King, Jr.

"Long has an enviable knack for discovering new angles from which to assess the significance of Martin Luther King Jr.'s life, message, and legacy. In this bold and provocative book, he explores King's ideas and actions in relation to homosexuality and gay rights. A distinctive and original contribution to the field of King studies." - Lewis V. Baldwin, author of The Voice of Conscience: The Church in the Mind of Martin Luther King, Jr.