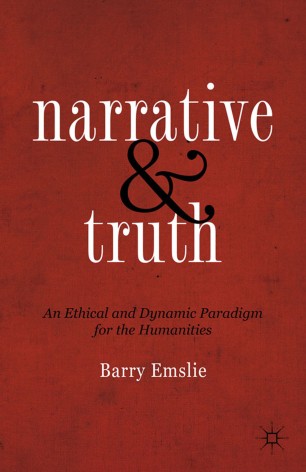 An Ethical and Dynamic Paradigm for the Humanities

In this book, Emslie establishes that narrative explanations are to be preferred over non-narrative in the humanities. They are more truthful in two senses. They both correspond more closely to reality and allow inference as to normative values. This is particularly the case when aesthetics are added to the mix.

Barry Emslie is an independent scholar working in Berlin, Germany.

"An independent scholar and author of Richard Wagner and the Centrality of Love (2010), Emslie argues for the value of narrative explanations in humanistic writing. He develops this argument through the analysis of an unusually wide-ranging mix of theoretical and critical fields that includes Marxist humanism, feminist theory and literary criticism, psychoanalysis, and German idealist philosophy, along with a number of eclectic subjects - such as sports and conspiracy theories - by which he explains the value of the kinds of narrative explanation for which he argues . . . This is not a book for those uninitiated into the language and content of critical theory, but it usefully explores the form and purpose of writing in the humanities. Summing Up: Recommended. Graduate students, researchers, faculty." - CHOICE