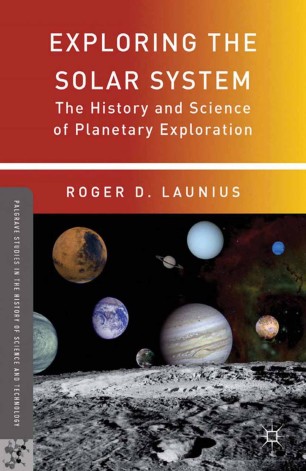 The History and Science of Planetary Exploration

Beginning in the early days of the Space Age - well before the advent of manned spaceflight - the United States, followed soon by other nations, undertook an ambitious effort to study the planets of the solar system. The remarkable fruits of this research revolutionized the public's view of their celestial neighbors, capturing the imaginations of people from all backgrounds like nothing else save the Apollo lunar missions. From the first space probes to the most recent planetary rovers, they have continually delivered impressive discoveries and reshaped our understanding of the cosmos. Offering fascinating investigations into this crucial chapter in space history, this collection of specially commissioned essays from leading historians opens new vistas in our understanding of the development of planetary science.

"Today, the scientific community is concerned about NASA's declining budget and the corresponding impact on the future of planetary exploration. In this context, Exploring the Solar System, edited by Launius (Smithsonian National Air and Space Museum), is a very timely work. The book's 14 essays focus on the history of NASA and solar system exploration from the earliest days of the space agency. The volume fills a unique niche in the literature since the essays on the scientific motivation behind and accomplishments of missions like Voyager, Galileo, Magellan, and Cassini are accompanied by others on the organization and management of NASA during the development and launch of these and other missions. These latter essays discuss the tensions between scientists, administrators, and the politicians who were responsible for the NASA budget, revealing many of the important issues that surround past, current, and future solar system exploration. This combination of aerospace history and planetary science provides the entire picture of the full life cycle of these missions - not just their most successful moments. Part of the 'Palgrave Studies in the History of Science and Technology' series." - Chris Palma, Senior Lecturer, Pennsylvania State University, USA

"Fifty years after Mariner 2 flew past Venus, Exploring the Solar System, instrumented with some of the best scholars around, gives us a historical flyby of what has evolved since that first encounter. The book instantly claims standing in the canon." - Stephen J. Pyne, Regent's Professor in the School of Life Sciences, Arizona State University, USA, and author of Voyager: Exploration, Space, and the Third Great Age of Discovery

"For anyone who wants to understand how planetary exploration actually occurs, this book is essential reading. It adroitly explains the management, science, imagination, and public policy that have produced spectacular revelations about our planetary neighbors." - Howard McCurdy, Professor of Public Administration and Policy, American University, USA

"In Exploring the Solar System, Roger D. Launius brings together a fascinating collection of essays that explains our attempts to scientifically understand our planetary neighbors. As important, by examining the political, technological, and even cultural history of this quest during the post-World War II era, this book highlights the essential role played by space exploration in shaping our understanding of life back on Earth." - Neil M. Maher, Associate Professor of History, Federated History Department at NJIT - Rutgers University, Newark, USA