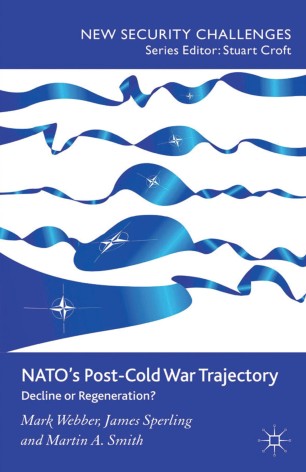 Two decades since the watershed of the Cold War, this book investigates NATO's staying power. This book investigates how the Alliance has adapted and managed to attend to new roles and purposes through the lens of International Relations theory. The Alliance will continue, but will remain subject to ongoing crises and challenges of change.

MARK WEBBER is Professor of International Politics and Head of School (Government and Society) at the University of Birmingham, UK. He is the author/editor of several books on post-Soviet Russia, European security governance and foreign policy analysis. His work on NATO has involved editing special issues of International Affairs and the Journal of European Integration. He is currently co-editing a book on Theorising NATO.
JAMES SPERLING is Professor of Political Science at the University of Akron, Ohio, USA. His publications have explored various facets of German foreign economic and security policy as well as issues around the new security agenda, global security multilateralism, and regional security governance. His most recent publications include the co-authored EU Security Governance (Manchester University Press 2007) and the co-edited National Security Cultures: Patterns of Global Governance (Routledge 2010), European Security Governance: The European Union in a Westphalian World (Routledge 2009), and Global Security Governance (Routledge 2009).
MARTIN A. SMITH is Senior Lecturer in Defence and International Affairs at the Royal Military Academy Sandhurst, UK. He is the author or co-author of several books on NATO and European security after the Cold War and most recently of Power in the Changing Global Order (Polity Press, 2012).