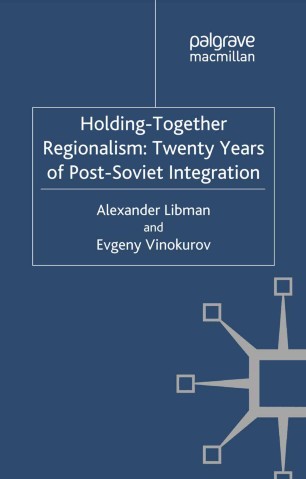 An in-depth analysis of one of the most important and complex issues of the post-Soviet era, namely the (re-)integration of this highly interconnected region. The book considers the evolution of 'holding-together' groups since the collapse of the Soviet Union in 1991, looking at intergovernmental interaction and informal economic and social ties.

Alexander Libman is Assistant Professor at the Frankfurt School of Finance & Management, Germany, Senior Research Fellow at the Russian Academy of Sciences and Affiliated Researcher at the East China Normal University. His principal publications have appeared in the Journal of Common Market Studies, Journal of Comparative Economics and Review of International Political Economy.

Evgeny Vinokurov is Director of the Centre for Integration Studies at the Eurasian Development Bank. He has written and edited a number of monographs and papers on economic and political integration, including A Theory of Enclaves (2007) and The CIS, the EU and Russia: Challenges of Integration (2007).