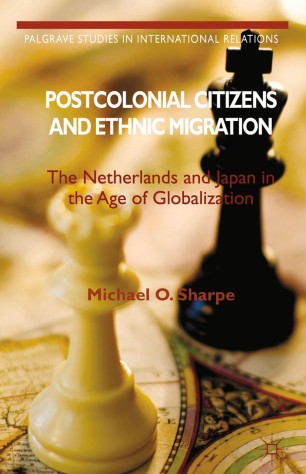 The Netherlands and Japan in the Age of Globalization

This book provides a cross-regional investigation of the role of citizenship and ethnicity in migration, political incorporation, and political transnationalism in the age of globalization, exploring the political realities of Dutch Antilleans in the Netherlands and Latin American Nikkeijin in Japan.

Michael O. Sharpe is Assistant Professor of Political Science at York College, City University of New York, USA. In addition to adjunct positions at Ramapo College and the Master of International Relations Program at City College/CUNY, he has previously worked as a political analyst for a Japanese consulate and a project coordinator for a Tokyo-based international NGO.

"Michael Sharpe brilliantly weaves together two cases of post-colonial and ethnic migration, Dutch Antilleans in the Netherlands and Nikkeijin from Latin America in Japan. In so doing he sheds new light on the nature of post-colonial and ethnic migrations and diaspora and on the quality of Dutch and Japanese democracy. This is a fascinating book and I highly recommend it." -James F. Hollifield, Southern Methodist University, USA

"How do modern democracies deal with migrants that for historical and legal reasons may claim to be part of the nation, but whose 'return' to the metropolis does not respond to the demands of the political opportunity structure, labor market, nor to a postcolonial nostalgia for empire? In a fascinating comparison of Antillean migrants in the Netherlands and Latin American Nikkeijin returnees to Japan, Michael O. Sharpe offers intriguing observations and conclusions on the meaning of citizenship and ethnicity in a globalized world where 'national identity' is as highly valued as it is fiercely contested." - Gert Oostindie, Leiden University, The Netherlands

"This book is a very great example of a cross-national comparison that allows us to identify the mechanisms of political incorporation among immigrants. Michael Sharpe takes a careful look at highly contrasting cases of post-colonial citizens and co-ethnics which several receiving states give a preferential access to immigration. Citizenship and ethnicity have been one of the most relevant and controversial themes in considering state membership in the era of globalization. Interestingly, the author also provides a fascinating illustration of contradictory processes of exclusion and marginalization in the political arena, even though these immigrants share citizenship or ethnicity that would presumably represent symbols of inclusion into society. His powerful argumentation deserves the attention of any social scientist doing comparative analyses." - Hirohisa Takenoshita, Sophia University, Japan

"This is an innovative, comparative study of Antillean postcolonial and Nikkeijin ethnic return migrants from a political science perspective. Although one would never think of comparing these two immigrant groups in the Netherlands and Japan, Sharpe has uncovered some striking similarities based on research in both countries. Despite their citizenship and ethnic ties to the host country, both immigrant groups experience unexpected levels of marginalization and Sharpe's explanations for their relative lack of political incorporation are quite convincing. In addition, Sharpe effectively uses these particular case studies to interrogate broader issues related to citizenship, ethnicity, and transnationalism among immigrants in liberal democratic states. As a result, this book is of interest to a broad academic audience." - Takeyuki (Gaku) Tsuda, Arizona State University, USA

''Michael Sharpe (York College, CUNY) has produced a fascinating and well-thought out, if sometimes cumbersome, cross-regional analysis of 'privileged' ethnic and post-colonial migrations. This work not only contributes to a growing literature on post-colonial migrations, but also to state-led and societal integration mechanisms, inclusive national identity, and globalization....Overall, this work offers a valuable exploration of ethnic- or nationality-based privileged legal migration mechanisms. The book is certainly recommended reading for anyone interested in post-colonial and ethnic migration regimes, as well as those interested in the civic participation of migrants more broadly." - Jonathan Paul Katz, candidate in the MSc Migration Studies programme at the University of Oxford, UK

''The literature on the incorporation of immigrants into Organisation for Economic Co-operation and Development countries has much to say about the role of citizenship and about different versions of nationalism across the civic/ethnic spectrum. Sharpe (York College, CUNY) offers a unique, valuable contribution to this literature. He does so through a comparative analysis of select immigrants in two countries the Netherlands and Japan who might be expected to find themselves in an advantageous position but in fact discover challenges to inclusion ... However, for complex reasons that Sharpe details carefully and convincingly, in both cases marginalization persists. It does so, he contends, at a moment when the Netherlands turns away from multiculturalism and rediscovers ethnic nationalism, and Japan moves at least haltingly in the opposite direction.'' - P. Kivisto, Augustana College, USA, writing in Choice, June 2015