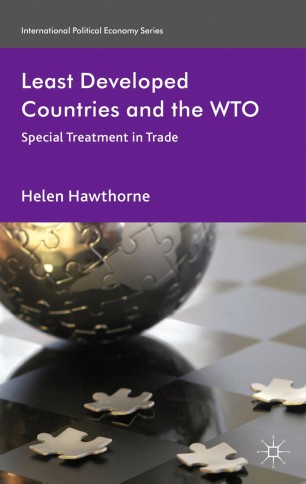 Least Developed Countries and the WTO

Helen Hawthorne is Visiting Lecturer at City University London, UK, where she completed her PhD in 2011. She has an MA in International Relations from the University of Kent and a degree in Business Studies from Robert Gordon's Institute of Technology (now the Robert Gordon University), both in the UK.

'In a literature that is notoriously technical, economistic and overly legalistic, the plight of least developed countries and the role of seemingly intangible concepts like 'norms' receives scant attention. Yet, amid the concern for large players, big numbers and grand legal frameworks, is a book that treats both least developed countries and norms seriously and does so with aplomb. Helen Hawthorne's book offers a cogent and compelling analysis of the role of norms and of least developed countries in the multilateral trading system. It breaks new ground and is a must for students and scholars of trade politics alike.' -Rorden Wilkinson, University of Manchester, UK

'Hawthorne's volume makes an important contribution in its focus on least developed countries and the trade regime. Through several case studies it shows how the process of norm development and internalization has not necessarily been a smooth or linear one, but one which has ultimately empowered LDCs in their engagement in the trade regime and allowed them to put forward claims which both powerful developed and developing country members of the WTO have had to address. Few studies have focussed specifically on Least Developed Countries and even fewer have examined the role of norms within the development of the international trade regime. On both counts this book is a welcome addition to scholarly studies in international political economy.' -Elizabeth Smythe, Concordia University, Canada

'In this well written, easily accessible book, Helen Hawthorne provides a much needed and detailed account of the increasing influence of LDCs in the WTO. Using an original approach that focuses on the role of norms in international trade governance, and in particular the norm of special treatment, she uncovers and explains the political economy of LDC activism in multilateral trade governance.' - Donna Lee, University of Birmingham, UK

'This is a substantial work and important read for anybody interested in learning about the status of Least Developed Countries (LDCs) under legal the framework of the World Trade Organization (WTO). The book explains what it means to be classified as a LDC and examines the role played by these countries in the world trading system.' - Anna Lanoszka, University of Windsor, Canada