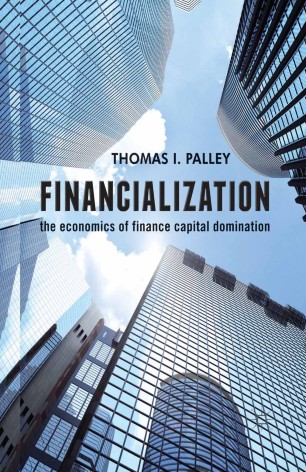 The Economics of Finance Capital Domination

The term financialization is a term that has become popular to describe developments within the global economy, and particularly within developed industrialized economies, over the past thirty years. The book is divided into four sections, which together give a comprehensive treatment of the economics and political economy of financialization.

THOMAS PALLEY is an economist living in Washington DC, USA. He is currently Senior Economic Policy Adviser to the AFL-CIO in Washington DC. He was formerly chief economist with the US - China Economic and Security Review Commission. Prior to joining the Commission he served as director of the Open Society Institute's Globalization Reform Project and as assistant director of Public Policy at the AFL-CIO. He is the author of Plenty of Nothing: The Downsizing of the American Dream and the Case for Structural Keynesianism, Princeton University Press (1998); Post Keynesian Economics: Debt, Distribution and the Macro Economy, Macmillan/St.Martins Press (1996); From Financial Crisis to Stagnation: The Destruction of Shared Prosperity and the Role of Economics, Cambridge University Press (2012); and The Economic Crisis: Notes From the Underground, CreateSpace (2012). He has published in numerous academic journals, and written for The Atlantic Monthly, American Prospect and Nation magazines. His numerous op-eds are posted on his website www.thomaspalley.com. Dr. Palley holds a B.A. degree from Oxford University, UK and a M.A. degree in International Relations and Ph.D. in Economics, both from Yale University.