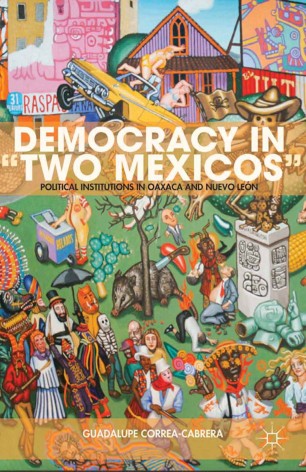 This book explains some of the ways in which deteriorated socioeconomic conditions (inequality in particular) and institutional limitations (corruption, electoral exclusion, and a weak rule of law, among others) affect political stability in extremely unequal developing countries, like Mexico, where democracy is not yet fully consolidated.

Guadalupe Correa-Cabrera is an assistant professor of Government at University of Texas at Brownsville.

"This book is different in many ways from the plethora of studies devoted to democracy in Mexico. For one, the study sheds new light on the confusion within much of the contemporary literature on democracy, factionalism, and inequality in Mexico. Second Correa-Cabrera . . . takes a sub-national rather than cross-national approach . . . [She] argues that to avoid descent into praetorianism . . . the state must address the issue of institutional limitations to effectively translate the interests and political preferences of dissidents into policy that will ensure peace and order. This thought-provoking synthesis of the factors that facilitate and obstruct the development of Democracy in Mexico in particular and Latin America in general would be an asset to any library. Recommended." CHOICE

"This wonderfully nuanced study is a must-read for scholars and students of Mexico and Latin America, as well as for those who wish to understand economic and institutional development in the hopes of dealing with social conflict. Making a strong theoretical and empirical contribution, Guadalupe Correa-Cabrera shows that nearly every state of Mexico is different and deserves careful attention."- Tony Payan, University of Texas at El Paso and Baker Institute of Rice University, USA

"Democracy in 'Two Mexicos' is a pioneering comparative analysis of the states of Oaxaca and Nuevo León within a diverse nation-state in the process of consolidating its democracy. Using a methodical and sophisticated model to explain 'Active Political Factionalism,' Guadalupe Correa-Cabrera advances theory in her analysis of numeric indicators that contrast institutional development and economic inequalities, and she provides rich depth with analysis from 85 elite interviews. Ultimately, Correa-Cabrera produces a magnificently comprehensive study that speaks to all who study comparative politics generally and specifically to those who study political economy within the North American region of Mexico, the US, and Canada." - Kathleen Staudt, University of Texas at El Paso, USA, author of Violence and Activism at the Border

"New blood for a new Mexico. Guadalupe Correa-Cabrera is part of a dynamic group of young social scientists who are painting the complex and multidimensional mural of a country that is transforming itself in every way. Democracy in 'Two Mexicos' is an intellectual provocation of the first order." - Sergio Aguayo, El Colegio de México, Mexico