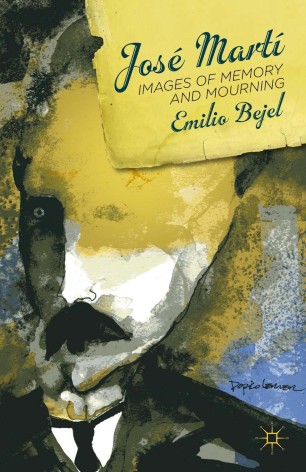 Images of Memory and Mourning

This book is a critical study of visual representations of José Martí The National Hero of Cuba , and the discourses of power that make it possible for Martí's images to be perceived as icons today. It argues that an observer of Martí's icons who is immersed in the Cuban national narrative experiences a retrospective reconstruction of those images by means of ideologically formed national discourses of power. Also, the obsessive reproduction of Martí's icons signals a melancholia for the loss of the martyr-hero. But instead of attempting to "forget Martí," the book concludes that the utopian impulse of his memory should serve to resist melancholia and to visualize new forms of creative re-significations of Martí and, by extension, the nation.

Emilio Bejel is a distinguished professor of Latin American Studies at the University of California at Davis.

"An astute and balanced analysis." - The Americas: A Quarterly Review of Latin American History

"The figure of José Martí has seduced several generations of Cubans of various ideological persuasions, both on the island and in the diaspora. In this thought-provoking and tightly argued tour de force, Emilio Bejel insightfully interprets and subverts the fascination with Martí's iconography in dominant discourses of Cuban national identity." - Jorge Duany, director, Cuban Research Institute, Florida International University

"Bejel takes us on a historical journey through the complex visual representations of one of Latin America's most revered heroes. Rigorously researched, theoretically sophisticated, this groundbreaking book will certainly remain as an authorative and persuasive study of Marti's iconicity in relation to state power and ideology. A must-read." - Leopoldo M. Bernucci, Russell F. and Jean H. Fiddyment Chair in Latin American Studies, University of California, Davis

"Can we say something new about José Martí? So many articles and so many books, both popular and academic, have been written about the great Cuban writer and political figure that whenever a new text about him appears I always have to ask myself this question. The answer regarding Emilio Bejel's book is definitely positive. Yes, this is a must-read book for all interested in Martí and Cuban culture in general. Bejel gives us a new perspective of Martí by reading his iconography. He reads pictures to understand the great Cuban author and, by doing so, offers us a brilliant book that joins the work of other new scholars - I think of Lillian Guerra, Oscar Montero and Julio Ramos - who have made major contributions to Martí studies." - Efrain Barradas, professor, Center for Latin American Studies, University of Florida, Gainesville

"One would think it nearly impossible to find another way to study the most important independence hero, intellectual, and writer in Cuban history; and yet Emilio Bejel has done it. His book on José Martí's iconography and its relationship to national history and myth-making is a bold look at the man and his historic roles, according to artists who have portrayed him in paintings, monuments, and film, and also to contemporary interpretations of such imagery through our own cultural memory. This 'corporeal' analysis, based on abundant visual documentation, is literally a remaking of one of the most fascinating figures in Latin American nation formation, and succeeds in its reconstruction by actually questioning much of the legend surrounding the man. In this fashion, Bejel carries out a critical analysis of the many ways in which Martí's body has been used as a metaphor for Cuba's own social and political body, and the results reveal different facets of a figure who is often - and officially - portrayed as a hero and a saint." - Eliana Rivero, professor emerita, The University of Arizona