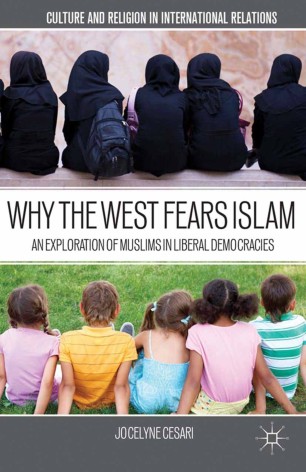 Why the West Fears Islam

An Exploration of Muslims in Liberal Democracies

Jocelyne Cesari examines the idea that Islam might threaten the core values of the West through testimonies from Muslims in France, Germany, the United Kingdom, the Netherlands, and the US. Her book is an unprecedented exploration of Muslim religious and political life based on several years of field work in Europe and in the United States.

Jocelyne Cesari, is a political scientist, specializing in contemporary Islamic societies, globalization and democratization. She is Senior Research Fellow at the Berkley Center for Peace, Religion and World Affairs at Georgetown University. At Harvard University, she directs the international research program called 'Islam in the West." She has written numerous articles and books on Islam, Globalization, Democratization and Secularism in Western and Muslim-majority contexts. Her most recent publications include Encyclopedia of Islam in the United States (2007), Muslims in the West After 9/11: Religion, Politics and Law (2010), and The Awakening of Muslim Democracy: Religion, Modernity and the State (2013).

“This is a very interesting and well-grounded book based both on primary and secondary data and makes it a great work on Islam in the west, discussing all the major themes that dominate public debates, for example, liberalism, secularism, terrorism, integration policies, and so on. … addresses principally to the academic community (scholars, researchers, students) who will absolutely be benefitted both from the analysis as well as from the appendices and exhaustive notes at the end of the book.” (Alexandros Sakellariou, Nordic Journal of Migration Research, Vol. 54 (4), 2015)

"Cesari shines in presenting the material in a clear and direct manner that will appeal to a wide range of readers. At around 150 pages of information packed text, the book is both accessible and illuminating. Much as the Gallup poll's project[2] offered the first major undertaking on the opinions of Muslims in countries with significant Muslim populations, Cesari's book presents the first comprehensive investigation on the opinions of Muslims in the West. By adding the voices of Muslims rather than simply analyzing Islam in the West, Cesari has provided an important contribution in deconstructing the myth of the incompatibility between Islam and liberal democratic societies." - Council for European Studies, Reviews and Critical Commentary

"This book is an eye-opener that denies all sides the luxury of willful ignorance or unchallenged ideological projection. Bold, sophisticated and almost embarrassingly informative, Jocelyne Cesari's effort is certain to elevate the discourse around one of the most important relationships of our time: that between Muslims and their Western compatriots." - Sherman A. Jackson, King Faisal Chair of Islamic Thought and Culture, The University of Southern California, and author of Islam and the Blackamerican: Looking Towards the Third Resurrection