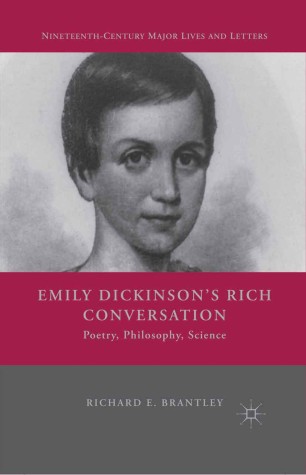 Richard E. Brantley is Alumni Professor of English, Emeritus, at the University of Florida, USA.

“Richard E. Brantley’s Emily Dickinson’s Rich Conversation: Poetry, Philosophy, Science … is a substantial study that seeks to illuminate Dickinson’s poetry as a dialogic art form, engaged in a stylistic and thematic exploration of a wide variety of philosophical, scientific, and poetic discourses. … Emily Dickinson’s Rich Conversation is, in itself, an imaginative conversation with Dickinson that will provoke lively further debate on many of the subjects it addresses.” (A Year's Work in English Studies, 2015)

"Brantley's erudite and affectionate book brings a lifetime of scholarship on Dickinson and the wider context of Anglo-American empirical and Romantic traditions to bear on his reading of the poet." - The Emily Dickinson Journal

"This book gives us a newly riveting Dickinson, a capacious, complex, and supple poet who could out-do Darwin in staring at the earth's chaos but who could also, at the core of the turbulence, channel Wordsworth's undying sense that order would prevail: not the rigid orders of the logicians or the philosophers, but the more aesthetic structures of the heart, always attuned, even when saddest, to beauty, which, as we know from Keats, can only exist if it's already dying. Remarkably, given his past achievements as a historian of ideas and a literary critic, this is Brantley's best book yet." - Review 19

"Brantley demonstrates triumphantly, through his generous and engaging consideration of Dickinson's range of personae and of her innumerable interlocutors, living or dead - in an oeuvre tuned in both to Anglo-American poetry and to Anglo-American philosophy and science - that what he calls her 'life-writing' exhibits essentially an 'allegiance to dialogue'. . . Richard Brantley is a superbly gifted critic and (if one may use that term) a master of Dickinson's oeuvre." - Richard Gravil, The Wordsworth Circle