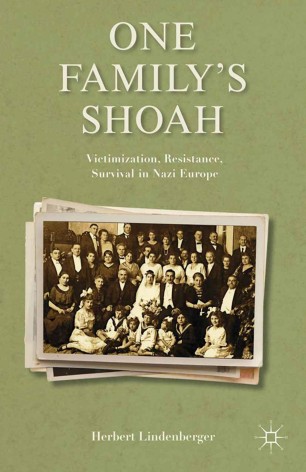 Deploying concepts of interpretation, liberation, and survival, esteemed literary critic Herbert Lindenberger reflects on the diverse fates of his family during the Holocaust. Combining public, family, and personal record with literary, musical, and art criticism, One Family's Shoah suggests a new way of writing cultural history.

Herbert Lindenberger is Avalon Foundation Professor of Humanities Emeritus at Stanford University, USA. He is the former president of the Modern Language Association and founded the graduate program in Comparative Literature at Stanford University. He has published widely on literature, music, and cultural history, including books on Wordsworth, Büchner, Trakl, historical drama, opera, and critical theory. Among other honors, he has been the recipient of Fulbright, Guggenheim, NEH, and Stanford Humanities Center Fellowships.

"One Family's Shoah is unique among Holocaust memoirs and memorials. A brilliant literary critic and scholar, Lindenberger here turns his attention to his own German-Jewish relatives - relatives that he, of a younger generation and born in the USA, never came to know in person. Not only does he recreate the life (and death) of his aunts and uncles, many of whom perished in the camps; he interweaves their stories with reflections on famous writers and composers of the period, as well as putting before us his own highly individual historical and political analysis of the choices and decisions made by his family. Unsentimental, but never unsympathetic, One Family's Shoah will force you to think about those central words that give the author his chapter titles: 'Deceiving', 'Memorializing', 'Interpreting', 'Liberating', 'Surviving', 'Compensating', and 'Re-positioning'. For anyone interested in the actual life of representative Jewish citizens of Germany in the 1930s and 40s, One Family's Shoah is certainly indispensable." - Marjorie Perloff, author of The Vienna Paradox: A Cultural Memoir and Wittgenstein's Ladder: Poetic Language and the Strangeness of the Ordinary

"Combining the passionately personal and the carefully researched, this deeply original book offers a history of the Holocaust through the amazing range of experiences in the life of one family. Living as we do in an age when we have come to know more and more about this period, what stands out is the author's account of his personal (and familial) repression of any talk of his family members' various fates. Lindenberger's moving reflections on the unspeakability of the Shoah, on the unconscious silencing of it in the years after the war, even (or especially) by those whose lives were most impacted by it, help us understand an important human response to the trauma of history." - Linda Hutcheon, University Professor Emeritus of English and Comparative Literature, University of Toronto, Canada

"A fine, imaginative, and distinctive book by a notable American scholar and author." - Berel Lang, author of Philosophical Witnessing: The Holocaust as Presence

"A great deal is known about the failed symbiosis of Germans and Jews with its horrific end in the Holocaust. But two intertwined features make Lindenberger´s book unique and eminently readable: the fact that the protagonists belong to his own greatly ramified family whose multiple destinies cover the entire phenomenon, successful emigration, thwarted attempts at escape, resistance and execution by the Nazis, death camp and Theresienstadt, a 'model concentration camp' which proved to be no less lethal. The other feature that makes this work inestimably superior is the fact that each chapter provides the appropriate historical context and rises to enlightening philosophical reflections and conclusions." - Egon Schwarz, Rosa May Distinguished Professor Emeritus in the Humanities, Washington University, St. Louis, USA and Corresponding Member, Academy of German Language and Literature, Germany