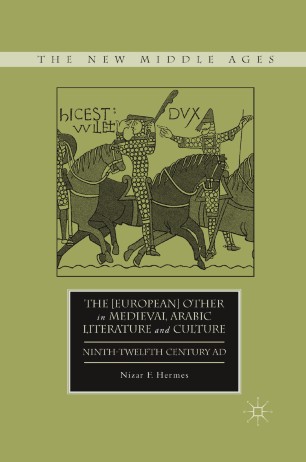 The [European] Other in Medieval Arabic Literature and Culture

Contrary to the monolithic impression left by postcolonial theories of Orientalism, the book makes the case that Orientals did not exist solely to be gazed at. Hermes shows that there was no shortage of medieval Muslims who cast curious eyes towards the European Other and that more than a handful of them were interested in Europe.

"In this important book, which is based on his PhD dissertation, Nizar Hermes explores the depiction of Europeans in medieval Arabic texts. In the process he draws attention to the corpus of works by writers from both the eastern and western Muslim world that describe Europe, and in doing so proposes a valuable re-assessment of what these works tell us about Muslim attitudes to Europe and its inhabitants during the period under discussion . . . This book will hence be invaluable to scholars, students and interested laypersons seeking to gain a better understanding of how Europe was seen from the Islamic world." - The Medieval Review

"A valuable and cogent review of what a number of medieval Arabic writers, in particular geographers, have said about medieval Europe and Europeans . . . Hermes has provided an extremely useful and readable survey addressing an important issue in the history of cultural contacts between Europe and the Arab world." - Speculum

"While previous research has tended to argue that Arabs basically took note of [Western] Europe only since the eighteenth century, the present study by Nizar F. Hennes, based on his Toronto doctoral dissertation, presents a wealth of different material that confirms in a variety of ways that Arab writers and scholars paid considerable attention to Europe already since the ninth century. Hermes does not intend to consider whether or how much Arabic culture might have influenced medieval European culture, which would be certainly a most intriguing topic as well; instead he makes wonderful and highly impressive efforts to determine what Arab scholars knew about Europe, as reflected by their chronicles, travelogues, and scientific work . . . Hermes's study represents a major step forward in our understanding of East-West communication already in the Middle Ages." - Mediaevistik: International Journal of Interdisciplinary Medieval