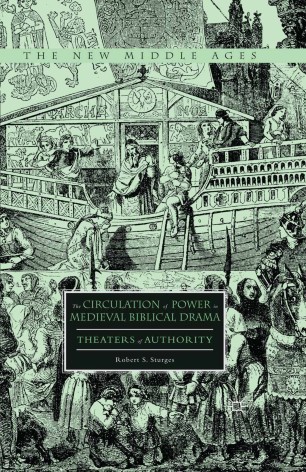 The Circulation of Power in Medieval Biblical Drama

A literary reading informed by the recent temporal turn in Queer Theory, this book analyzes medieval Biblical drama for themes representing modes of power such as the body, politics, and law. Revitalizing the discussions on medieval drama, Sturges asserts that these dramas were often intended not to teach morality but to resist Christian authority.

"In The Circulation of Power in Medieval Biblical Drama, Robert S. Sturges overturns longstanding assumptions about the interpretive docility of medieval drama, proving its queer (and queering) potential in a series of stunningly original readings. Plays I thought I knew, from Quem quaeritis to the Wakefield Master's Second Shepherds', have never looked fresher." - Tison Pugh, Professor of English, University of Central Florida, USA, and author of Sexuality and Its Queer Discontents in Middle English Literature and Chaucer's (Anti-) Eroticisms and the Queer Middle Ages

"A must-read for anyone interested in gender, religion, or theater. This book makes a compelling case for the subversive potential of medieval biblical plays. In wide-angled and theoretically-nuanced readings, it shows how power is created and sustained in early religious theater, but - more importantly - also critiqued. Among the book's highlights is its insistence on the continued relevance of medieval plays and on the value of past culture in helping us rethink power relations in the present." - Clair Sponsler, Professor of English, University of Iowa, USA and author of The Queen's Dumbshows: John Lydgate and the Making of Early Theater