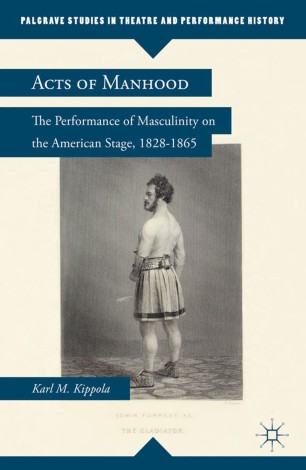 The Performance of Masculinity on the American Stage, 1828–1865

Exploring the performance of masculinity on and off the nineteenth-century American stage, this book looks at the shift from the passionate muscularity to intellectual restraint as not a linear journey toward national refinement; but a multitude of masculinities fighting simultaneously for dominance and recognition.

Karl M. Kippola is an assistant professor of Theatre at American University, USA and has been a professional actor and director for the last twenty-five years.

"In the early to mid-nineteenth century, the American theatre was an ostensibly masculine endeavor in both production and reception. The playwrights were male, the theatre managers were male, the audiences were predominantly male, and in the theatre companies of the era, the majority of performers were male. In his groundbreaking book, Acts of Manhood: The Performance of Masculinity on the American Stage, 1828-1865, theatre historian Karl Kippola embraces this reality and examines how theatre artists generated and manipulated models of the ideal male. Through detailed study of the competing strains of masculinity passionate action and intellectual self-control - as embodied by the emotional and muscular Edwin Forrest and the genteel and restrained Edwin Booth respectively, the two great stars that bookend this period, Kippola analyzes how and why performances of masculinity changed dramatically during the ante-bellum years and how they influenced the perception and construction of masculinity. In examining these critical issues, Kippola makes an important contribution to the ongoing study of theatre and gender." - John Frick, University of Virginia and past president, American Theatre and Drama Society

"An important contribution to the discourse on gender in antebellum America, Karl Kippola's book sheds new light on important figures in nineteenth-century theatre history, unpacking the complexity of constructed masculinities within the context of an emerging national identity. This study is valuable to both the gender/theatre studies specialist and students of American culture." - Elizabeth Reitz Mullenix, professor of Theatre, Miami University, Ohio