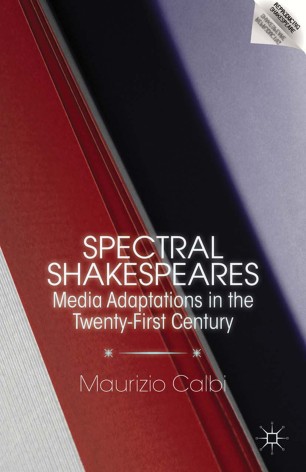 Media Adaptations in the Twenty-First Century

Spectral Shakespeares is an illuminating exploration of recent, experimental adaptations of Shakespeare on film, TV, and the web. Drawing on adaptation studies and media theory as well as Jacques Derrida's work, this book argues that these adaptations foreground a cluster of self-reflexive "themes" - from incorporation to reiteration, from migration to addiction, from silence to survival - that contribute to the redefinition of adaptation, and Shakespearean adaptation in particular, as an unfinished and interminable process. The "Shakespeare" that emerges from these adaptations is a fragmentary, mediatized, and heterogeneous presence, a spectral Shakespeare that leaves a mark on our contemporary mediascape.

Maurizio Calbi is Professor of English Literature at the University of Salerno, Italy. He is the author of Approximate Bodies: Gender and Power in Early Modern Drama and Anatomy and has published on Shakespeare and early modern culture, screen adaptations, postcolonial literature, and postcolonial rewritings of Shakespeare.

"[Maurizio Calbi] consider issues of remediation and multimodality through, respectively, cinematic and digital appropriations of Shakespeare in Alexander Fodor's Hamlet, Klaus Knoesel's Rave Macbeth, and Such Tweet Sorrow. It is this unique focus on the intersections between multicultural and multimodal Shakespeares that sets Calbi's book apart as an insightful, original contribution to adaptation studies. Calbi makes readers remain uneasy with his Shakespearean specters. His initial reading of twenty-first century Shakespeares as 'fragmentary' and multiple does not simply leave us with friendly ghosts at textual play; instead, he posits the current intersections of global/local, homely/foreign, and connected/disconnected in new media Shakespeare as inequitable, disturbing contact zones." - Borrowers and Lenders

"Calbi's writing constitutes theoretical criticism at its best. Moving between the BBC's 'Shakespea(Re)-Told' season, arthouse films, and social networking discussion, as well as other cultural products and practices, the author showcases a rich array of ghostly renderings of the Bard. By turns seductive and heretical, and as arresting as it is intriguing, Spectral Shakespeares ranges ambitiously across time and space to argue passionately and persuasively for the crucial significance of Shakespeare's multi-layered and multi-mediatized afterlives." - Mark Thornton Burnett, Professor, Queen's University Belfast, Northern Ireland

"International in scope yet well-focused, theoretically complex yet admirably lucid, Maurizio Calbi's Spectral Shakespeares traces how Shakespeare has been disseminated and fundamentally transformed by myriad new media in the twenty-first century. The result is an utterly dazzling, state-of-the-art discussion that recasts the study of Shakespearean adaptation from the ground up, challenging us to take fuller account of the ways in which our Shakespeare is inescapably telemediated and to confront the full implications of Shakespeare's ghostly nature as we watch his image flicker across our screens. The chapter on 'Such Tweet Sorrow' is particularly outstanding as a model for considering how new formats extend and reshape what counts as 'Shakespeare' in the contemporary mediascape. An instant classic in the field, and absolutely essential reading for anyone interested in Shakespeare's cultural afterlife in the new century." -  Douglas Lanier, Professor of English, University of New Hampshire, USA