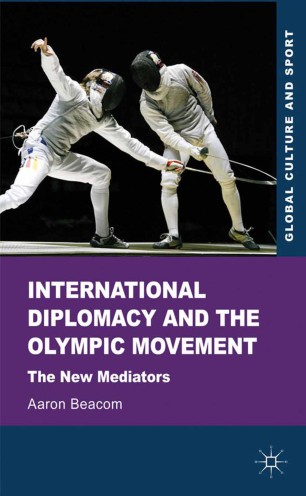 International Diplomacy and the Olympic Movement

Part of the Global Culture and Sport book series (GCS)

This book explores the relationship between diplomatic discourse and the Olympic Movement, charting its continuity and change from an historical perspective. Using the recent body of literature on diplomacy it explores the evolution of diplomatic discourse around a number of themes, in particular the increasing range of stakeholders engaged in the Olympic bid, disability advocacy and the mainstreaming of the Paralympic Games and the evolution of the Olympic boycott. The work addresses the increasing engagement of a number of non-state actors, in particular the IOC and the IPC, as indicative of the diffusion of contemporary diplomacy. At the same time it identifies the state as continuing in the role of primary actor, setting the terms of reference for diplomatic activity beyond the pursuit of its own policy interests. Its historical investigation, based around a UK case study, provides insights into the characteristics of diplomatic discourse relating to the Games, and creates the basis for mapping the future trajectory of diplomacy as it relates to the Olympic Movement.

AARON BEACOM Senior Lecturer in Sport Policy and Programme Leader for the MA in Applied Sport Development at University College Plymouth St. Mark and St. John, UK. He has previously published Sport and International Development (with R. Levermore). His current research relates to the international development of disability sport.

"The book is a brilliantly researched documentation of the history of diplomacy related to the Games ... [it] represents a timely foray into sport's relevance to political developments; especially pertinent given the current attention paid to the repercussions for host countries of hosting mega-events. It fastidiously scours the annals of communiques treated as 'discourse' originating from actors such as the International Olympic Committee, the UK Foreign & Commonwealth Office and the National Olympic Committees of host countries over the last 120 years." - International Journal of Sport Policy and Politics

"Beacom's text provides a sound basis for further studies discussing and developing the concept of Olympic diplomacy by way of recognition of both Olympism's major role in international society and the evolving relationship between diplomatic discourse and the Olympic Movement." - Diplomacy & Statecraft