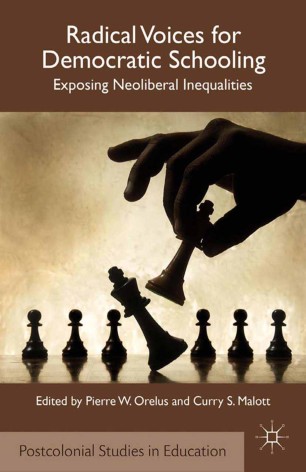 Comprised of in-depth interviews and conversations with key figures in education and activism that thoroughly examine the intersection of neoliberalism, neocolonialism, and racism, this first-rate collection critically explores, through their teaching, various, important issues situated in the context of Western neoliberalism and neocolonialism.

"Radical Voices for Democratic Schooling takes the pulse of the educational environment in the United States and finds that it is on life support. Conversations with leading thinkers with vast experience in the world of US education provide useful maps to understand this present and the way to a more enlightened future. An important collection for all those who are concerned about the devastation of the educational landscape." - Vijay Prashad, George and Martha Kellner Chair in South Asian History and Professor of International Studies, Trinity College, US

"For over half a century, social criticism in the US was overwhelmed by a basic taboo. What was said or written about economics, politics, and culture avoided any direct or sustained criticism of the hegemonic economic system: capitalism. The very few who dared to violate the taboo were systematically marginalized professionally and often also personally. This taboo shielded capitalism, allowing its most socially retrograde tendencies finally to yield contemporary neoliberalism and the global crisis that erupted in 2007. This book makes an important contribution to the literature now exploding that taboo. It taps an impressively wide range of sources (that does not fear to include Marxism) and focuses a critical-yet-hopeful eye on education. Today's growing movement to question and change capitalism needs and will benefit from this book's thoughtful analysis." - Richard D. Wolff, Professor of Economics Emeritus, University of Massachusetts, Amherst and Visiting Professor, Graduate Program in International Affairs, The New School, New York, US