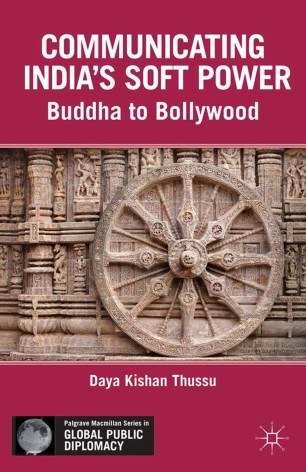 In recent years, India has emerged as a major economic and political power. Yet, the country's cultural influence outside India has not been adequately analyzed in academic discourses. This book, a pioneering attempt, from an international communication/media perspective, is aimed to fill the existing gap in scholarship in this area.

Daya K. Thussu is a professor of International Communication at the University of Westminster

"Those acquainted with Daya Thussu as the editor of the respected journal Global Media and Communication and his earlier publications will not be surprised by this excellent, comprehensive yet brief survey of the scope and limits of India's Soft Power and the country's changing status in global public culture and media. This book will remain a powerful aid to scholars and researchers seeking clues to the many undercurrents in India's definition of its global presence and the projection of that self-definition through its public diplomacy." - Professor Ashis Nandy, Senior Honorary Fellow, Centre for the Study of Developing Societies, New Delhi

"Daya Thussu elegantly places India's Soft Power in its historical and cultural framework, deftly managing the geopolitical and technological context. His analysis is innovative and persuasive, as is fitting in telling a grand tale of a grand Indian narrative." - Monroe Price, Director, Center for Global Communication Studies, Annenberg School for Communication, University of Pennsylvania, USA

"Daya Thussu's book rescues the concept of soft power from American hands and applies it insightfully to India, and the concept is made richer and more useful as a result. With its dynamic and prosperous diaspora, the growing global popularity of its spiritual beliefs and practice, its reach as a global economic and technological powerhouse, and even its cherished cuisine, India's growing soft power potential is evident. Yet Thussu also takes a hard look at the impediments that stand in the way of India taking full advantage of its soft power appeal. This book is a must-read for anyone interested in broadening their understanding of the role of soft power in foreign affairs." - Steven Livingston, Professor of Media and Public Affairs and International Affairs, George Washington University, USA

"A balanced, learned and historically informed analysis of India's global presence and the soft power that accompanies it. The book contains many important insights and should be of value to decision makers and general public alike." - Professor Lord Bhikhu Parekh