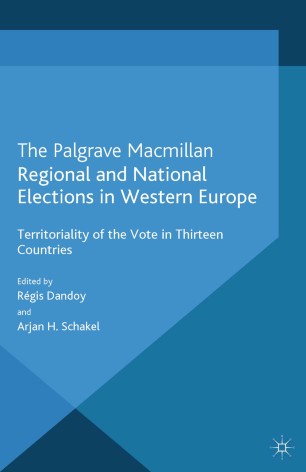 Territoriality of the Vote in Thirteen Countries

Utilizing both historical and new research data, this book analyzes voting patterns for local and national elections in thirteen west European countries from 1945-2011. The result of rigorous and in-depth country studies, this book challenges the popular second-order model and presents an innovative framework to study regional voting patterns.

'Elections at the subnational level have so far often been looked at through the lenses of methodological nationalism. That includes the assumption that they are 'second order' and thus only to be understood for their meaning at the statewide level. This collection does a great job analyzing carefully and systematically substate electoral dynamics on their own terms. The result is a must-read, a truly 'first order' book.'

'This stimulating volume provides a comprehensive survey of the diversity and distinctiveness of regional elections across western Europe. Beyond this, it opens our eyes to regional elections as a core subject of comparative politics that repays serious study. This volume is a tour de force in transcending methodological nationalism.'

'Together with a team of first-rate scholars, Dandoy and Schakel provide the first in depth and rigorous analysis of regional and national elections between 1945 and 2011 across 13 West European countries. In the context of an increasingly 'multi-level' Europe, this book rightly puts the comparative study of regional elections at the forefront of analysis and as such it successfully addresses the 'national bias' that had come to dominate much of party and electoral research until recent years. It is a must read for scholars of electoral studies, parties and federal and regional studies.'

'This impressive book is a veritable treasure trove of striking data, suggestive conceptualisation and thought-provoking analysis. Its publication surely represents a landmark moment in the development of comparative electoral analysis.'

'A most welcome study on the interplay of regional and national elections. The comparative volume combines the advantages of a clear and comprehensive analytical framework with the richness of in-depth country chapters. The book explores the diversity of regional electoral behavior but it also finds common factors that are at play in many political systems in Western Europe'