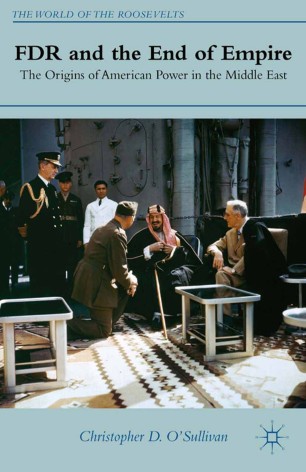 FDR and the End of Empire

The Origins of American Power in the Middle East

Based upon extensive archival research in Great Britain, the United States, and the Middle East, including sources never previously utilized such as declassified intelligence records, postwar planning documents, and the personal papers of key officials, this is painstakingly researched account of the origins of American involvement in the Middle East during the Presidency of Franklin D. Roosevelt. It explores the effort to challenge British and French power, and the building of new relationships with Iraq, Iran, Saudi Arabia, Egypt, and the Levant states. It also reveals new and controversial discoveries about Roosevelt's views on Palestine, his relations with Middle East leaders, and his often bitter conflicts with Churchill and de Gaulle over European imperialism. Modern-day parallels make this story compelling for followers of current events, World War II, Franklin Roosevelt, the Middle East, or British imperialism.

CHRISTOPHER D. O'SULLIVAN teaches History and International Studies at the University of San Francisco, USA and was recently a Fulbright visiting professor at the University of Jordan. His books include Colin Powell: American Power and Intervention From Vietnam to Iraq (2009); Sumner Welles, Postwar Planning, and the Quest for a New World Order (2008) which won the American Historical Association's Gutenberg-e Prize; and The United Nations: A Concise History (2005).

"The author's solid research and thoughtful, objective analysis expertly show that modern US policies in the Middle East are rooted in WW II. Highly recommended." - CHOICE

"The problems the US faces today in the Middle East are, in good part, the byproduct of what Franklin Roosevelt and his advisers did or failed to do. Decolonization and nationalism, added to oil and geopolitics, became an explosive mix. In a useful structure that recognizes the differences between the various states of the region, O'Sullivan has provided readers with the raw material, the research pathways, and a framework needed to understand better the nature of that history during its early stages in the Second World War." - Warren Kimball, editor of Churchill and Roosevelt: The Complete Correspondence and author of Forged in War: Roosevelt, Churchill, and the Second World War and The Juggler

"Modern U.S. policies in the Middle East are rooted in World War II, and O'Sullivan - in straight-forward prose that draws from rich archival records both in the United States and overseas - superbly uncovers and analyzes those roots, particularly the explosive (and colorful) FDR-Churchill confrontations over the Prime Minister's determination to restore the British Empire in the region. Oil, of course, is a central theme of O'Sullivan's account, while his case studies, notably the chapter on Iran, are revealing for current, as well as the seminal 1940s, American policies." - Walter LaFeber, Andrew and James Tisch University Professor Emeritus, Cornell University, USA