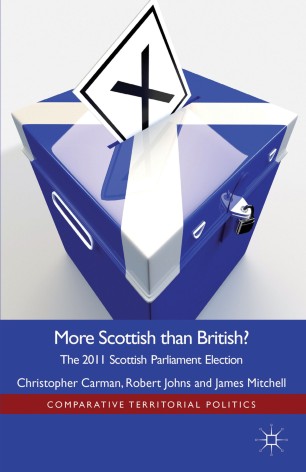 Using official statistics, this book explores how the SNP managed to confound expectations and win a parliamentary majority in the 2011 Scottish General Election. Perhaps surprisingly, it was not constitutional politics or the return of the Conservatives to power in Westminster but domestic issues that decided the vote in the SNP's favour.

Professor Christopher Carman held previous positions at the Universities of Pittsburgh and Strathclyde before joining the University of Glasgow, UK, in 2013. While at Strathclyde he directed the 2011 Scottish Election Study. He has written on a variety of topics in public opinion and political representation in the US and UK contexts, including Representing Red and Blue: How the Culture Wars Change the Way Citizens Speak and Politicians Listen (2012) and Elections and Voters in Britain (2012).

Dr Robert Johns is Senior Lecturer in Politics at the University of Essex, UK. Previously he worked at the University of Strathclyde where he co-founded the Scottish Election Study. He has written on several topics in public opinion and political psychology, including co-authorship of Voting for a Scottish Government (2010) and Elections and Voters in Britain (2012).

James Mitchell held chairs in Politics in the Universities of Sheffield and Strathclyde before taking up his post in the University of Edinburgh, UK, in 2013. He co-directed the ESRC Scottish Election Studies in 1992, 2007 and 2011 and the Scottish Referendum study in 1997 and co-authored monographs on each. His most recent books include (with L. Bennie and R. Johns), The Scottish National Party (Oxford University Press) and Devolution in the United Kingdom (Manchester University Press).