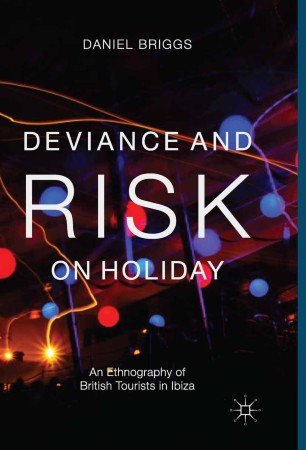 Deviance and Risk on Holiday

An Ethnography of British Tourists in Ibiza

This book represents the first attempt to step inside the holiday experience of young British tourists in San Antonio, Ibiza. Briggs' ethnographic study reveals the ugly truth about how and why they get involved in deviance and risk-taking when they go abroad, driven by self validation and a commodified social context.

Daniel Briggs is Reader in Criminology and Criminal Justice at University of East London, UK. He is author of Crack Cocaine Users: High Society and Low Life in South London (2012), editor of The English Riots of 2011: A Summer of Discontent (2012) and co-author of Assessing the Use and Impact of Anti-Social Behaviour Orders (2007).

Daniel Briggs brings to life [...] Overall, this is an excellent book. If you are an experienced ethnographer, you should have this manuscript as it will further provoke your thoughts on the meanings of 'fieldwork'. If you are a young scholar or a student

who is about to embark on an ethnographic study, this is the book you must read as it will definitely encourage

you to conduct ethnographic fieldwork. If you are a skeptic scientist who does not perceive works like this as

'scientifically' relevant, you must read this book as it may change your mind." - International Journal of Culture, Tourism and Hospitality Research

"Briggs has not merely gone out to Ibiza on a 'jolly' to be justified by doing a bit of 'research' at the same time his thorough accounts of the tourist industry, along with interviews with tourists, local businesses, prostitutes and criminal justice practitioners, that he undertook whilst on the island, show his work to be robust and extremely well informed (as well as sounding thoroughly exhausting!) This book is an important read for anyone interested in ethnography, the night time economy, deviance, youth, drink and drugs cultures, or merely with a curious disposition (or wishing to know more about the British Ibiza experience). It is a compelling read, with an enormous amount of raw and engaging data, which I would highly recommend. Howard Journal of Criminal Justice

"This book uses qualitative methods (observation/interviews) to examine the risk-taking behaviours of British tourists on the Mediterranean island of Ibiza, including alcohol and other drug consumption this reviewer felt that Biggs's participant-observation methods were excellent for reaching this sub-population and his Facebook follow-ups will be of interest to many alcohol researchers. Briggs is excellent at uncovering the commercially-oriented status stratification within the British camp. As such, this book was as entertaining as it was enlightening and most enjoyable to review." - Drugs: Education, Prevention and Policy

"What Briggs has produced, is a clear-sighted, razor sharp and entirely unsentimental ethnography of British tourism that cuts through the rather old-fashioned radical libertarian bluster of far too much criminological research. Instead of automatically

resorting to a language of creative resistance and the reclamation of identity through enjoyable 'deviation', he shows how these concepts have become part and parcel of a dominant ideology that moulds social interaction into forms that facilitate the circulation of capital whilst promoting a suite of harms in the lives of 'true believers'." - Sociology

"Daniel Briggs has written a brass-neck ethnography of young British holidaymakers on Ibiza, a global focus for hedonism and excess [...] The book is not an easy read. It is not pretty. It describes an episodic mindlessness that might help to explain the underpinnings of the riots of 2011. Sometimes described as a lost generation, this book shows that it is a generation which needs and deserves to be understood. Even so, it lifts the lid off something that you would probably rather not know about." - Emeritus Professor Geoffrey Pearson, University of London, UK

"For forty years far too much sociology has celebrated consumer culture. This is contemporary ethnography of the highest standard. Daniel Briggs uses his considerable skills to reveal in stark clarity the 'dark side' of the holiday experience. Contributing to a gathering new wave of critical thought, this type of daring and honest study will once again make sociology real and politically inspiring." - Steve Hall, Teeside University, UK

"Daniel Briggs has written a highly critical, unsettling yet humorous account of the dark underbelly of Ibiza [...] In this uncompromising ethnography Briggs brings us up close and personal with the blazing hedonism of a group of tourists who seem to have lost all sense of self-preservation amidst the corporate bars and nightclubs which shrewdly market, promote and capitalize on nightlife excess." - Sébastien Tutenges, Aarhus University, Denmark

"[...] Briggs' commitment to actually telling it like it is, and pushing past the redundant trope of organic cultures of resistance, suggests a return to the kinds of critical realism that sociology and criminology desperately needs [...] an outstanding study, and a valuable contribution to the field." - Simon Winlow, Teeside University, UK

"Briggs's captures beautifully the peculiar, yet highly frustrating, condition of postmodern youth cultures: self-awareness with stasis [...] Above all, this book represents an account of a truly critical ethnography that has values and a strong moral compass. It provides a refreshing and much needed tonic to the current liberal impasse of minimal intervention in capitalism's worst, and downright unethical, extremes." - Anthony Ellis

"Brutal, brave, brilliant. Three are the words that come to mind to best describe the ethnographic masterpiece that Daniel Briggs brings to life [...] If you are an experienced ethnographer, you should have this manuscript as it will further provoke your thoughts on the meanings of 'fieldwork'. If you are a young scholar or a student who is about to embark on an ethnographic study, this is the book you must read as it will definitely encourage you to conduct ethnographic fieldwork. If you are a sceptic scientist who does not perceive works like this as 'scientifically' relevant, you must read this book as it will hopefully change your mind." - Paolo Mura

"Daniel Briggs' Deviance and Risk on Holiday sets out to explain the 'Brits abroad' phenomenon, to inject a bit of socio-structural context into a media and academic discourse [...] What Briggs has produced, in other words, is a clear-sighted, razor sharp and entirely unsentimental ethnography of British tourism that cuts through the rather old-fashioned radical libertarian bluster of far too much criminological research." - Mark Horsley